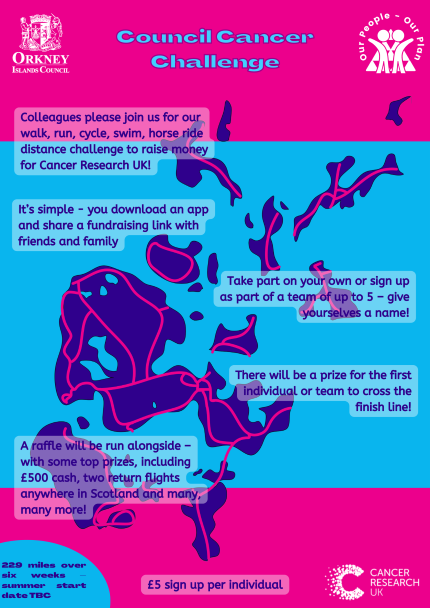 One hundred and fifteen Council employees are hoping to raise thousands of pounds for a cancer charity by taking part in a distance challenge.

Individuals and teams will walk, run, cycle, swim, skateboard or horseride their way to cover 229 miles/368km – the length of priority one roads in Orkney looked after by the Council’s roads team – over a six -week period beginning on Monday 27 June.

As part of the challenge, participants will be seeking sponsors to donate via www.orkney.gov.uk/Donate . Pledges from Orkney businesses so far include £500 from the Merkister Hotel family, £200 from Iain Harcus of the Aalskere fishing vessel and £100 from Steven Cooper at Aurora Jewellery – a fantastic way to kickstart the fundraiser which is now live.

There’s also a raffle running alongside with some very generous donations, including £500 cash, two return Loganair flights, a piece of Sheila Fleet jewellery, B&B stays at the Merkister Hotel and Bellavista in Kirkwall, vouchers from Williamsons, Orkney Cheese and Coopskea Cleaning, a box of Aalskere filleted fish, a Cooke Aquaculture salmon, a bottle of gin from the Orkney Gin Company, a bottle of Highland Park, gifts from Nearhouse Knits, a sweetie hamper from Sinclair’s, a Woodwick candle from Kirsten Mears, a knitted item and jewellery from Paula Johnston, a handknitted shawl and more!

The seed was first planted by OIC staff member, Inga Antonio, who raised the idea of a fundraiser with Press Officer Lorraine Stout, who took it from there.

Inga, who works for the OIC Development and Infrastructure department, said: “When one of the most important people in my life was diagnosed with cancer, I knew I wanted to raise money for Cancer Research to help others. It went from a solo challenge and then grew into the idea of getting the whole OIC involved and also the chance for employees to bond again after COVID, while getting active and having some fun.

“As so many people have restrictions on what they can physically do, the idea of a distance challenge seemed the best whereby people can just log their movements on their smart watch or phone by doing what they enjoy! Dog walking, dancing, martial arts, cycling or even just walking around the Council Offices! I therefore reached out to my friend Lorraine Stout in the Council’s Press Office to see if we could make the idea a reality. Lorraine has worked so hard getting employees involved and setting everything up - without her this wouldn’t be such a great success.”

Lorraine has her own personal reasons for getting on board.

“I was 45 when I was diagnosed in 2018 with an aggressive throat cancer – the largest tumour my Aberdeen-based oncologist had ever dealt with. Having young children, it was not just terrifying for me but all the family – my biggest fear was leaving them. How would they manage without mum? A harsh treatment followed – I was told they had one shot to throw all they could at it, but it was curable if it worked. Seven weeks of a stronger than usual dose of radiotherapy followed, and five doses of chemo.

“I am now three and a half years in remission and get regular check-ups. The treatment came with life-changing side effects – I will never swallow normally again – so I rely on high calorie prescription milkshakes, my speech and hearing have been affected but I am here still and that is the important thing. Don’t get me wrong there are times I miss food, having a dram, get frustrated at my dry mouth and strange voice but it’s the price I have to pay for being around.

“Finding a cure for this dreadful disease is everything to so many – for the stark reality is one in two of us will get cancer in our lifetime. Staggering. Raising money for research is key – it will not only save lives – lives of you or people you may know – but also makes treatments less invasive. Please, please dig deep in memory of ones that have gone, ones who are fighting this disease and those who will face it in the future. Together we can raise a lot of money.”

Given the pandemic years, and separation of many staff it was also felt an important opportunity to bring teams back together again in a positive way.

Lorraine said: “Health and wellbeing is an essential ingredient for a better workplace. So, part of this drive is to get folk moving again – myself included. Exercise and fresh air is so good for the body and mind. There are many staff who have linked up to do the challenge in teams which is great as that’s partly what this is all about – bringing folk back together and doing something that has a purpose and it will make you feel good, knowing you are going to help others. Some of the team names have been quite creative as well and caused a few laughs – we have the Puffin Puffers, Shaaron’s Shufflers, the Hatston Muppets, Ninja Birds, Turbo Sloth and Just Off the Couch to name a few.”

Raffle tickets, which have been printed for free by The Orcadian, will be available from various outlets – more details on this will follow soon – and Lorraine will be selling them from the NSPCC stall at the County Show on Saturday 13 August. The draw will take place on Monday 15 August at the OIC Offices. Keep an eye on OIC Updates Facebook page for regular updates.