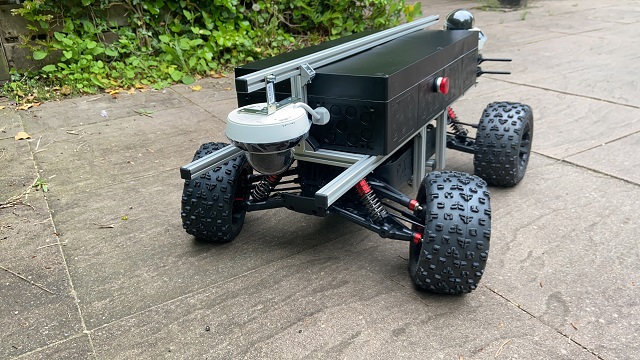 Orkney is to play an important role in a pilot project exploring the use of autonomous - or self-driving - vehicles (AVs).

The Planning for Autonomous Vehicles (PAV) project will see four pilot projects running in the North Sea region looking at how autonomous vehicles could interact with existing modes of transport.

HITRANS - the Highlands and Islands Transport Partnership, which Orkney is part of - are the lead partner in the project, alongside the Hannover Region in Germany, Almere City in the Netherlands and Varberg Municipality in Sweden.

In Orkney, small AVs will undergo initial trials for logistics and freight purposes, such as the transport of general supplies, luggage, parcels, waste and other goods.

These AVs will move at walking pace and work is ongoing to identify a shortlist of potential routes and uses.

More Work Less Carbon, a company based in Utrecht, Netherlands, will supply the AVs and will work closely with the Robert Gordon University (RGU) and Orkney Research and Innovation Campus (ORIC) LLP at their campus in Stromness.

MWLC received the Solar Impulse Efficient Solution Label for the deployment of networks of small autonomous electric vehicles for goods transport. This label awards efficient, clean and profitable solutions with a positive impact on environment and quality of life.

An open afternoon will be held at ORIC on Thursday October 14, to introduce the project more widely, including demonstrations of the type of vehicles that will be used.

In a larger scale project in Inverness, an AV passenger service will be provided between Inverness Campus and Inverness Retail and Business Park. Safety is paramount and although the vehicle used will be capable of driving itself, a driver will be present at all times to take control if required.

Jayne Golding, Projects and Policy Manager, HITRANS, said: “We commissioned the testing of Autonomous Vehicles in Orkney as part of a wider project involving AV pilots across Europe, including Inverness. The pilot will allow us to learn more about the use of autonomous vehicles in remote and rural areas and how they can be incorporated into future transport planning strategies.”

Councillor Graham Sinclair is Chair of Orkney Islands Council’s Development and Infrastructure Committee. He said: ““Orkney has time and again proven itself to be a leader in the testing and trialling of innovative technologies and the fact that we have once again been selected as a project partner, shows just how well regarded our islands are in the research and development field.

“Self-driving vehicles may seem like something from way into the future, but the pace of development means they may become part of our transport mix in short order – and it’ll be interesting to use the opportunity of this project to see what that could mean for our daily lives.”

John McGlynn, Executive Manager at ORIC said: “ORIC is excited to welcome and work with the project partners on this initial demonstration. The campus in Stromness has long been associated with innovation in Orkney and is a logical ‘landing point’ for this first initiative in a new and exciting field."

Professor David Gray from the School of Creative and Cultural Business at Robert Gordon University said: “RGU is committed to working with Hitrans, OIC and other stakeholders to promote and deliver smart mobility in Orkney and this Autonomous vehicle project is an important step on that journey.”

Widespread use of self-driving vehicles is expected by next decade and the findings of the project will be used to determine how countries across Europe can effectively implement them - including considering how they fit in with green transport and spatial planning strategies, as well as likely socio-economic impacts.