St Magnus Cathedral is the first venue in Scotland to host Poppies: Weeping Window which is presented in Orkney to mark the centenary of the Battle of Jutland.

Weeping Window is a cascade comprising several thousand handmade ceramic poppies seen pouring from a high window to the ground below. The sculpture, by artist Paul Cummins and designer Tom Piper, is part of 14-18 NOW, the UK’s arts programme for the First World War Centenary.

The breath-taking sculpture, alongside Wave, a sweeping arch of bright red poppy heads suspended on towering stalks, was initially conceived as one of the key dramatic sculptural elements in the installation Blood Swept Lands and Seas of Red at the Tower of London in the autumn of 2014.

Orkney was the home of the Royal Navy’s Grand Fleet, and on 31 May 2016 Orkney will host the UK’s official commemoration for the Battle of Jutland. The largest and most decisive naval battle of the First World War was fought at the cost of over 8,000 lives. On the 5 June 2016 events will take place to commemorate the loss of HMS Hampshire which was sunk by a mine West of Orkney. 737 men lost their lives including the Secretary of State for War Lord Kitchener.

During this period a number of commemorative events, talks and exhibitions will be taking place throughout Orkney that will allow both our communities and visitors to reflect in particular on Orkney’s pivotal role in the war at sea and the great sacrifice made by both the Navy and civilian maritime communities.

As with all 14-18 NOW projects, the presentation of these sculptures across the UK brings the legacy of the First World War to life for new generations. 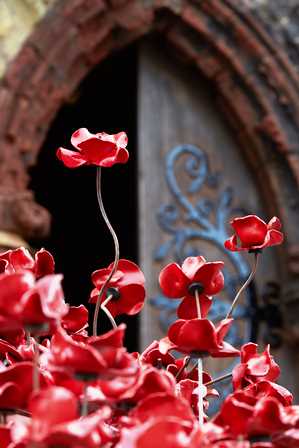 Cathedral staff and Volunteer Hosts will be on hand everyday between 09:00 and 20:00 to answer questions and provide visitors with further information about the artwork.

To find out more about Orkney’s First World War History, visit Orkney Museum’s summer exhibition at Tankerness House, Kirkwall (opposite St Magnus Cathedral) which is open 2 May onwards every day from 10:30 – 17:00. You can also visit the Scapa Flow Visitor Centre and Museum, Lyness, Hoy which is open every day from 10:00 – 16:30.

Presentation of Weeping Window in Orkney is kindly supported by NorthLink Ferries.

Learning and Engagement supported by The Foyle Foundation. 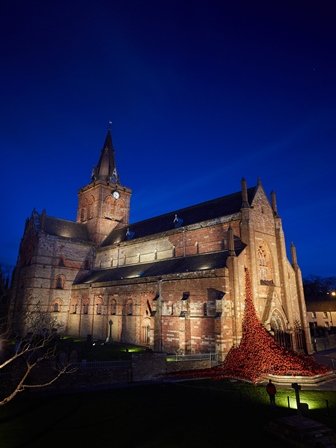 Further information about the commemorations can be found in the 'First World War Commemorative Cultural Programme' which can be accessed from the 'Related Links' section of this page.

First World War Commemorative Cultural ProgrammeDuring the course of the year, a wide range of exhibitions and events are taking place that have a particular emphasis on the war at sea and the great sacrifice made by both the Navy and civilian maritime communities.