The interactive visitor information panels at Lyness were unveiled on May 31, 2014, by Colin Kerr, the CWGC’s lead director for the Centenary of the First World War.

The event was held to commemorate the anniversary of the largest naval battle in history.

On 31 May 1916, the main fleets of the British and German navies clashed on the eastern side of the North Sea, at the Battle of Jutland.

For the Royal Navy, Jutland was unprecedented and remains unsurpassed: some 110,000 sailors fought in 150 British and 100 German vessels. A total of 14 British and 11 German warships were lost or damaged beyond repair.

More than 6,000 Royal Navy sailors and 2,500 Germans were killed, with many others suffering serious burns and wounds. Despite its losses, the Royal Navy retained command of the sea.

Mr Kerr said: “The Commonwealth War Graves Commission is at the heart of events to mark the Centenary of the First World War. We see an important part of that role as encouraging greater numbers of visitors to our cemeteries and then helping those visitors to appreciate why these places are here, who looks after them and why it is important to remember those who died.

“Here at Lyness, surely one of the most beautiful CWGC cemetery locations, we have been pleased to work with our partners in the Orkney Islands Council and the Royal Navy to raise awareness of the sacrifices made by the men and women of the Royal Navy during the two world wars.

“The new panels at Lyness will be an interactive way for new generations to learn about the final resting place of so many Commonwealth servicemen and women, in an engaging and meaningful way. I hope that the installation encourages many more people to visit this stunning and moving cemetery, and remember those who fell during both world wars.”

The panels at Lyness are among 500 to be installed at CWGC locations worldwide and feature information about the site of the cemetery and a QR (Quick Response) code.  When scanned with a smartphone, the QR Code provides access for further information including the personal stories of some of the casualties buried or commemorated there.

Among the stories revealed on the panels at Lyness are those of Walter Adams from Somerset, who died when HMS Hampshire struck a German mine off Marwick Head in heavy weather on the evening of June 5, 1916, and sank within 15 minutes. All but 12 men of over 650 on board perished, including Lord Kitchener, who was travelling with a delegation to Russia.

To access the personal stories on the World War 1 panels at Lyness go to the Commonwealth War Graves Commission website from the 'Related Sites' section of this page. 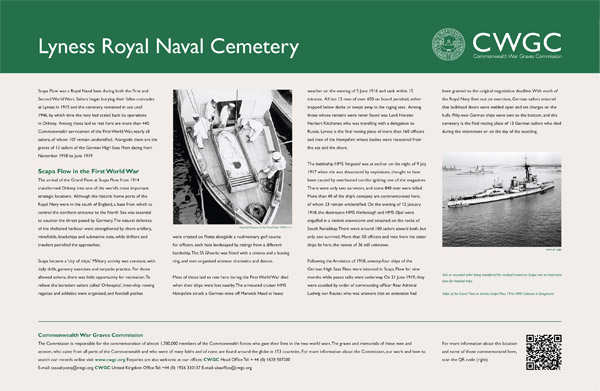 Scapa Flow was a Royal Naval base during both the First and Second World Wars. Sailors began burying their fallen comrades at Lyness in 1915 and the cemetery remained in use until 1946, by which time the navy had scaled back its operations in Orkney. Among those laid to rest here are more than 440 Commonwealth servicemen of the First World War, nearly all sailors, of whom 107 remain unidentified. Alongside them are the graves of 13 sailors of the German High Seas Fleet dating from November 1918 to June 1919.

The arrival of the Grand Fleet at Scapa Flow from 1914 transformed Orkney into one of the world’s most important strategic locations. Although the historic home ports of the Royal Navy were in the south of England, a base from which to control the northern entrance to the North Sea was essential to counter the threat posed by Germany. The natural defences of the sheltered harbour were strengthened by shore artillery, minefields, blockships and submarine nets, while drifters and trawlers patrolled the approaches.
Scapa became a ‘city of ships.’ Military activity was constant, with daily drills, gunnery exercises and torpedo practice. For those allowed ashore, there was little opportunity for recreation. To relieve the boredom sailors called ‘Orkneyitis’, inter-ship rowing regattas and athletics were organised, and football pitches were created on Flotta alongside a rudimentary golf course for officers, each hole landscaped by ratings from a different battleship. The SS Ghourko was fitted with a cinema and a boxing ring, and men organised amateur dramatics and dances.

Most of those laid to rest here during the First World War died when their ships were lost nearby. The armoured cruiser HMS Hampshire struck a German mine off Marwick Head in heavy weather on the evening of 5 June 1916 and sank within 15 minutes. All but 12 men of over 650 on board perished, either trapped below decks or swept away in the raging seas. Among those whose remains were never found was Lord Horatio Herbert Kitchener, who was travelling with a delegation to Russia. Lyness is the final resting place of more than 160 officers and men of the Hampshire whose bodies were recovered from the sea and the shore.

The battleship HMS Vanguard was at anchor on the night of 9 July 1917 when she was devastated by explosions, thought to have been caused by overheated cordite igniting one of the magazines. There were only two survivors, and some 840 men were killed. More than 40 of the ship’s company are commemorated here, of whom 23 remain unidentified. On the evening of 12 January 1918, the destroyers HMS Narborough and HMS Opal were engulfed in a violent snowstorm and smashed on the rocks of South Ronaldsay. There were around 180 sailors aboard both, but only one survived. More than 50 officers and men from the sister ships lie here, the names of 36 still unknown.

Following the Armistice of 1918, seventy-four ships of the German High Seas Fleet were interned in Scapa Flow for nine months while peace talks were underway. On 21 June 1919, they were scuttled by order of commanding officer Rear Admiral Ludwig von Reuter, who was unaware that an extension had been granted to the original negotiation deadline. With much of the Royal Navy fleet out on exercises, German sailors ensured that bulkhead doors were welded open and set charges on the hulls. Fifty-two German ships were sent to the bottom, and this cemetery is the final resting place of 13 German sailors who died during the internment or on the day of the scuttling.

The main fleets of the British and German navies clashed only once during the First World War, on the eastern side of the North Sea, at the Battle of Jutland. This cemetery is the final resting place of 38 officers and men who fought in HMS Barham and Malaya. Wounded men who survived the battle but died as a result of their injuries were buried in several cemeteries in the United Kingdom, including Queensferry Cemetery in Edinburgh. Men whose remains were recovered from the shores and waters of Scandinavia were laid to rest in Denmark, Sweden and Norway.

The sailors of the Grand Fleet served in the world’s most powerful maritime force. The Royal Navy’s ‘dreadnought’ battleships carried guns more destructive than almost any land artillery, and its fast battle cruisers had lighter armour but similar firepower. They were accompanied at sea by smaller cruisers and flotillas of destroyers. Ship’s companies ranged from several dozen men to well over a thousand, from senior officers to ordinary seamen, foreign observers and Royal Marines, gunners and stokers, signallers and cooks. Each ship had its place in the line; each man his place in the ship. Led by Vice Admiral Reinhard Scheer, the German High Seas Fleet sought to erode British superiority by bombarding coastal towns then attacking warships sent to their aid. On 30 May 1916, radio messages intercepted by the Admiralty revealed that the German fleet was preparing to sail. A squadron under the command of Admiral Sir David Beatty was dispatched from the Firth of Forth, followed by the Grand Fleet under Admiral Sir John Jellicoe from Scapa and Cromarty.

On the afternoon of 31 May, Beatty’s battle cruisers encountered their German counterparts, under Vice Admiral Franz von Hipper. They duelled for an hour, steaming south towards the High Seas Fleet, accompanied by the boom of guns and a haze of smoke. Silhouetted by the sun, the British ships presented excellent targets. In many, the doors of ammunition magazines were left open to enable cordite charges to be brought more quickly to the guns, exposing them to the blast of a shell strike on the turrets. HMS Indefatigable was hit and engulfed in flame before rolling to port and sinking. Soon afterwards, Queen Mary was obliterated by a series of explosions, leaving only a thick black cloud. Within minutes, more than 2,280 British sailors were lost.

On meeting Scheer’s battleships, Beatty’s squadron turned north towards the Grand Fleet. As they made away, shells damaged Barham and started fires in Malaya which killed or burned more than 100 men. Shortly after 6 pm the pursuing German ships came under the guns of Jellicoe’s dreadnoughts, deployed in a line across their path. Outnumbered and outmanoeuvred, the German fleet suffered heavy damage, but a third battle cruiser, HMS Invincible, was hit by a shell which ignited a magazine. She blew in half, taking more than 1,000 souls with her. With his ships in peril, Scheer reversed course and suffered further casualties in brief clashes with the pursuing British, including torpedo attacks by destroyers, twice escaping under the cover of smoke. When darkness fell, the German battleships passed astern of the main British force, fighting through Royal Navy destroyers, and made for the Danish coast. As 1 June dawned, the High Seas Fleet had escaped.

Despite its losses, the Royal Navy retained command of the sea. The German fleet took longer to recover, and by early 1917 had turned to submarine warfare. For the Royal Navy, Jutland was unprecedented and remains unsurpassed: some 110,000 sailors fought in 150 British and 100 German vessels. A total of 14 British and 11 German warships were lost or damaged beyond repair, including Hipper’s flagship Lützow. More than 6,000 Royal Navy sailors and 2,500 Germans were killed, with many others suffering serious burns and wounds. Most of the Commonwealth dead were lost with their ships, or stitched inside hammocks and committed to the deep; they are commemorated on memorials at Portsmouth, Plymouth and Chatham, and have no grave but the sea.

The Commission is responsible for the commemoration of almost 1,700,000 members of the Commonwealth forces who gave their lives in the two world wars. The graves and memorials of these men and women, who came from all parts of the Commonwealth and who were of many faiths and of none, are found around the globe in 153 countries. For further details and contact information, please visit the website from the 'Related Sites' section of this page.