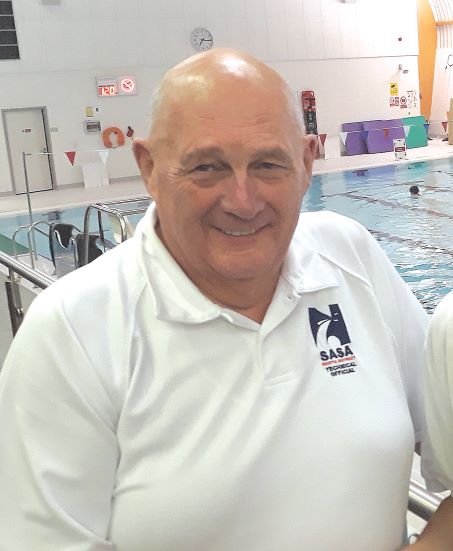 Ian Gibson has devoted his life to the sport of swimming, from learning to swim at a very young age at Scapa Beach to refereeing and judging at national and international competitions. Ian has had the dedication required in order to succeed in the sport.

Ian’s first involvement with swimming was at Scapa Beach. This was where many local people learned to swim under the guidance of Mr and Mrs Dave Keldie. Summer evenings were spent building the children's confidence in the water sufficiently enough to enable them then to take part in the end of holiday galas in the basins in Kirkwall and Stromness.

Ian was a member of the Junior Inter County Swimming team in 1961 where he broke the record for the 50-yard breaststroke. Which he still holds to this day.

Soon after Kirkwall Indoor Swimming Pool opened in 1972 Ian got involved in setting up a disabled swimming club. This was the start of what turned out to be a life-time commitment to swimming.

Whilst being heavily involved within Orkney swimming, Ian also gained many coaching and refereeing qualifications including being appointed Orkney Area Officials convener in 1995 by SASA North District Swimming. Since then Ian has:

Officiated at over 300 district meet sessions including:

Officiated at over 200 national and international meet sessions including:

Perhaps the highlight of Ian’s involvement with refereeing came when he was asked to be the “lead referee” for the Island Games, which was to be held in Shetland in 2005. This was a huge achievement, working with 72 officials, 67 volunteers and helping to make the games such a big success.

It was during this time to help improve his knowledge that Ian would give up his own spare time to go south to Glasgow/Edinburgh and Aberdeen to officiate at national events, where he was looked on as one of the best referees to have on the pool as his manner gave everyone confidence that they knew they were in good hands if Ian was in charge. His teaching, knowledge and expertise has been and continues to be crucial for Orkney swimming.

Ian is held in high regard in the swimming world and has received many awards from different organisations, including; Island Games 2005 and 2007, and Orkney’s local sports awards. However, perhaps the most fitting award came along in 2015 when Ian received ‘Life Membership of North District’ awarded to persons who have given outstanding service, over many years, to the SASA North District.