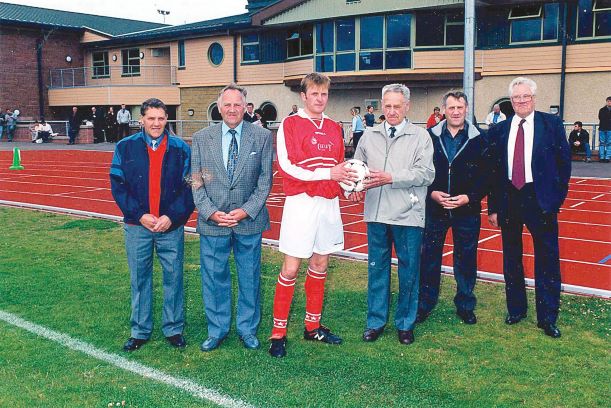 The five Hutchison brothers’ contribution to football in Orkney, especially the annual clash against northern rivals Shetland, has certainly gone down in sporting folklore.

Over a 25-year period between 1948 - 1973 there was at least one Hutchison brother that represented an Orkney County Football squad. This Orcadian family of brothers have assembled a total of 36 caps against Shetland. Something that will take a long time to match in the history of Orkney football.

The oldest brother, Jackie, had much of his career thwarted by World War II. However, during this time he played for Ness Battery which gave him the opportunity to play with professionals from outside Orkney, he also was stationed in Italy where he played for his company, again playing with several professionals. When Jackie returned from the war, he gained three caps for Orkney between 1948-50.

Freddie, the second brother, was regarded by many as one of the best centre-half’s in the north of Scotland. Winning four caps, he was highly effective both on the ground and in the air and may well have gained more caps had he not opted to be transferred to the police service in Paisley.

Bobby, the third brother began his career in 1954 as right-half, however he gained the majority of his eight caps as a forceful half-back. He captained Orkney to two memorable Inter-County victories; a 6 - 1 thrashing at the Gilbertson Park and a 6 - 4 win at the Bignold Park.

Ian Hutchison was the fourth brother to line up for Orkney, marking his debut with a hat-trick during the 6-1 rout of 1956. A fearsome forward with a lethal shot, his seven caps resulted in a total of 11 goals for Orkney.

Eric, the youngest brother, made his debut in 1959, winning 14 caps, and was a constant thorn in Shetland’s side, scoring five times and having many fine games. Eric attracted the attentions of Dundee United and had it is felt, that if his trial hadn’t been in November (several months after the Orkney season had finished) he may have swapped the surroundings of the Bignold Park for Tannadice Stadium in Dundee.

The youngest two brothers; Ian and Eric, also made an impression out-with the Northern Isles. Perhaps, Orkney’s biggest footballing achievement during this era, is the North Atlantic Cup win when they overcame both Shetland and the Faroe Islands across eight fixtures held between 1968 and 1973. Ian and Eric were both involved.