Please remember that when travelling on public transport, all intending customers must wear a face covering, unless exempt. 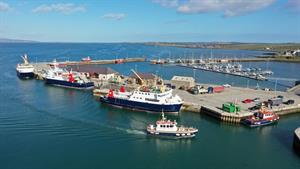 Folk in Orkney are being asked to feedback into a survey on the revised Orkney Ferries fare structure which has been in place now for nearly three months.

Residents are reminded that the draft inter-island air and ferry service timetables are presented to the Community Councils for consideration in advance of the Air and Ferry Consultative Forums, held biannually.

A transport representative is elected from each island Community Council to attend the Forums to outline the requests from the community in respect of the proposed timetables for the following summer or winter. These meetings are generally held in August, to discuss the future summer timetable, and during February to discuss the winter timetable for the following year. The timetables are then finalised, taking into consideration the points raised at the Forum where possible. A report is then presented to the Orkney Ferries Board with the final draft timetables for consideration. Subsequently, a report is presented to the Council’s Development and Infrastructure Committee (September and March of each year), outlining the points raised at the Forum, the Orkney Ferries Board and any significant amendments proposed to the timetable. The Committee are asked to consider and then approve the ferry timetables for the following summer/winter. In respect of the air services timetable, a similar report is presented to the Development and Infrastructure Committee for consideration and approval however the report must be presented to Full Council for final approval.

External ferry services to the Scottish mainland are provided by three operators. Links to the websites are available from the 'Related Sites' section of this page.

NorthLink Ferries operates passenger and vehicle services between Stromness, Orkney and Scrabster, Mainland and between Kirkwall, Orkney and Lerwick, Shetland and Aberdeen on the Mainland. Information on NorthLink Ferries is available from the Northlink Ferries website or by telephone on 0845 6000449.

There are two rail routes, firstly the North Highland Line from Inverness to Thurso and Wick, and then the East Coast services from Glasgow, Edinburgh and Dundee to Aberdeen.  Further details on rail services are available on the ScotRail website or by telephoning National Rail Enquiries on 08457484950.