Westray community rallies to support the RNLI – with a “scary” challenge 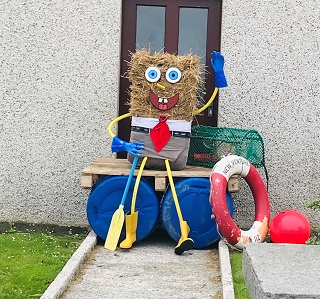 The Westray community – including a number of our school pupils – have rallied to support the RNLI – taking up the “scary” challenge of designing and making their own scarecrows.

Visitors and locals have been entertained and delighted to see more than 40 different scarecrows dotted about the island as part of the Westray RNLI Scarecrow Trail.

Westray Junior High School pupils Lizzie, 12, and Miller, 9, have created a football scarecrow scene with Gareth “Bale” and David De “Hay’a”! There are other clever takes on the characters Dorothy from the Wizard of Oz, Spongebob Squarepants, and Baywatch to name but a few.

Lizzie and Miller’s mum, Louise Harcus said: “We thought the scarecrow trail was such a fun idea. We enjoyed a drive round the isle voting for our favourite scarecrows and, seeing them every day puts a smile on your face. Living on an island we very much appreciate the RNLI and the lifesaving service that is given so willingly by the volunteer crews.”

The organisers asked folk to design and create their own scarecrow for display between 17 July and 1 August with a £5 entry fee. The public are also asked to choose their favourite – paying £1 for each time they cast a vote at local shops on the island. Each voting slip is also entered into a prize draw. In all three prizes are up for grabs – the public’s favourite, the judge’s favourite and the voters’ lucky draw. Winners will be announced in August. 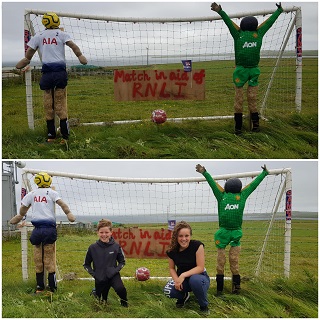 Funds raised will go to the RNLI.

Well done to all entrants for your hard work for what is a great cause.