The links between the Stromness Lifeboat and the town’s primary school are stronger than ever - with one class boasting family connections to seven members of the lifeboat crew! 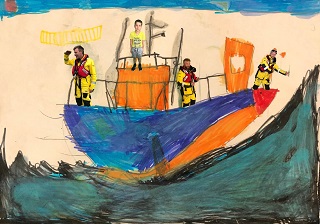 Six pupils in a single P2 class at Orkney Islands Council’s Stromness Primary are very aware of the fantastic work of the volunteer crew on board the Violet, Dorothy and Kathleen and one pupil – Ruan Temple - can claim a double whammy as his dad, Roy Temple and uncle Liam Temple are both crew members. Other pupils include Teri Sutherland, whose dad Andrew Sutherland is a crew member, James Anderson’s dad Alan Anderson is also part of the crew, Fergus Johnston’s dad Barry Johnston is a volunteer, as is Brody Green’s grandad Neil McGibbon, and Ola Bain’s uncle Alastair Bain is also a crewman.

The youngsters were asked to come up with some RNLI-related artwork and class teacher Helga Moss decided to take it to a new level.

Using a “green screen”, she has been able to “drop” photos of the crew and pupils on to the images drawn by the bairns – bringing their artwork to life!
Miss Moss explained that she had first seen the green screen resource being used while carrying out work experience at a school in New Zealand several years ago.

On her return to the UK, she purchased one and uses it regularly in her classroom. 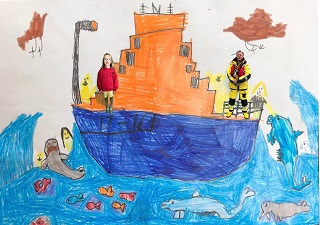 “It has really inspired children with their technology skills and also their writing skills. We use it all year round for Halloween, Bonfire Night, Christmas, Children in Need, Easter and any other projects we can. It is lots of fun and can bring their own artwork alive, also we can green screen onto any backgrounds which has been very useful especially during Covid time when we could not go anywhere.”

Miss Moss said: “The children are passionate and proud to be from Stromness and have a key interest in the Lifeboats around Orkney. Alan, a dad in the class, came to the school to tell us more about the Stromness Lifeboat back in September. We also studied the Longhope Lifeboat following from its 100 years since the disaster.

“We were asked by Richard Clubley (Lifeboat Press Officer for Stromness) to produce Lifeboat pictures for the Lifeboat display boards. The children did a fantastic job, one asked if we could green screen the lifeboat crew onto our pictures.

“I went along to one of the crew’s training nights with my green screen and photographed the men. I then shared the pictures with the children, and they selected which photos they wanted green screened onto their pictures. They really did put a lot of thought into it.

“We then got a few other lifeboat crew green-screened at school one night where even I got a chance to wear the gear and be green screened too!”

The links being forged are very important, according to Richard Clubley of the Stromness Lifeboat. “I asked for the work because I want to bring the life of the local RNLI more into the eye of the public - locals and visitors. We have a new display board outside the station for that purpose - paid for by money raised at the Blue Door recently.

“The response has been great, from both primary and secondary schools. Links with the RNLI are important both to keep everyone aware of what we do but also to encourage the crews and let them know they are appreciated.

“The Stromness lifeboat is visible from almost everywhere in the town. It is like a focal point or a symbol of the townsfolk’s compassion and readiness to put to sea at any time; to go to those in peril on the sea - regardless of race, colour or creed - free of charge and at no little personal risk. It is one of the highest ideals to which we can aspire. No wonder everyone is proud of it.”

The pupils are certainly proud with several already aspiring to join.

P2’s Ruan Temple said: “My dad and Uncle Liam are in the lifeboat crew. They go out to sea and save lives. I want to do the same when I am older.”

James Anderson, also P2 added: “The lifeboat goes out to sea and saves people lives. I would like to work on the lifeboat when I am older. My dad is part of the lifeboat. They are amazing and work really hard.”

Sigurd Seatter, P2, said: “The lifeboat saves people. I like watching the lifeboat going out to sea.”

Ola Bain, P2 said: “I like the lifeboat because they help rescue people. They go out in all weathers.”

Fergus Johnston, P2, said: “I like going to visit the lifeboat because it is a fast boat. They save people at sea. My dad is one of the crew.”