Ms Partridge said: “We would recommend every pupil and every member of staff coming into our school undertakes the twice a week testing as it is another additional measure of keeping the prevalence of COVID19 down in Orkney.

“We have seen a positive response among staff and pupils, who indicate that they also find this reassuring for themselves and others.”
This positive position is echoed at Kirkwall Grammar School.

Mr Hawkins said: “The Scottish Government arranged for every school across the country to receive test kits for their senior phase pupils and staff who are now attending at schools. For any senior pupil aged 16 or over they sign a consent form, and if they are under 16 a parent/carer signs a consent form on their behalf, which is then handed into the school reception from where they also pick up the test kit boxes.

“We have enough kits for all staff and senior phase pupils coming into the school.”

Mr Hawkins explained that the lateral-flow testing involves swabbing your throat and nose, the results of which are available to the person between 20-30 minutes later.

“So far the response has been very good with a steady stream of pupils coming in with their signed consent forms since last week when we advertised this as being available.”

If a positive test were to be identified, the person concerned is already at home and must then follow the clear instructions to register this result online from where Test and Protect will take over.

Mr Hawkins and Ms Partridge added: “The more people who take the self-tests and follow through depending on the results, the safer Orkney will be.”

While most people would rather not have to undertake a COVID19 test at any time, the students at both secondary schools have demonstrated a very mature attitude in their response.

Tom Johnston, S5, at Stromness Academy said: "It's not that bad to do, just a bit uncomfortable. I'm doing it because I want pupils to be able to get back into school - I hope this encourages other people to do it too."

Carmen Sandison is in S6 at Stromness and this has been her first experience of taking a COVID test. She said: "I hadn't ever had a test so I didn't know what to expect. I'd rather not have to do it because it's uncomfortable, but I'm still quite active in the community, getting buses, working and now coming in to school, so I'd rather know I'm not putting people at risk."

Stromness S5 pupil, Lewis Gray added: "I knew what to expect as I'd already had a test done. I'm coming into school for practical lessons and I want to make sure COVID doesn't get into school."

It was a similar picture at KGS, as Liam Tait S5 said: “I thought the test was fine although I was a bit apprehensive about the mechanics of the test. I was really keen to get tested before coming into school and didn’t want to be responsible for passing COVID on to anyone. I felt much more reassured coming back into school knowing pupils have the offer of a test.”

Ethan Lennon, S6, said: “I thought the test was quite easy and quick to do – the instructions were fine to follow. I felt glad that I had been tested as I was coming into school so didn’t want to put anybody ease at risk.”

KGS Tom Jacobsen S6 at Kirkwall Grammar School added: “I found it quick and easy to do, although I did think it was a bit uncomfortable. I was pleased to take the test and get a negative result as I had been at work and wanted to make sure I was negative before I came into school.” 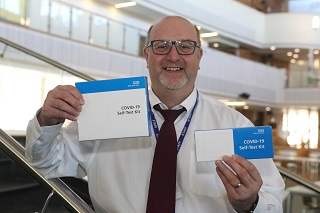 The Scottish Government outlined that local authorities and schools should, as they return on a phased basis from 22 February, make available twice-weekly at-home testing using lateral flow devices at the earliest opportunity, to:

Eligible staff include teachers, classroom-based support staff, administrative staff, facilities management staff (cleaners, janitors, etc.), school transport staff and other school-based staff who are critical to the effective delivery of school education.
Testing is voluntary and nobody should be required to undergo testing without consent or excluded from school or work if they do not wish to test. The Scottish Government would encourage school staff and senior phase learners to participate, to contribute to the wellbeing of their school communities.

Step by step guidance has been shared with schools and ELC providers via Objective Connect. This guidance was developed in collaboration with NHS Test and Protect and the UK Department for Health and Social Care to support school and ELC providers in the delivery of the Schools/ELC Asymptomatic Testing Programme.

Asymptomatic testing is an additional measure and should not replace other mitigations such as wearing a mask, social distancing, handwashing, and ventilation.