Work to expand and refresh Orkney’s flagship Scapa Flow Museum with a bespoke series of new galleries and café is well underway, with the full form and extent of the new extension now visible. 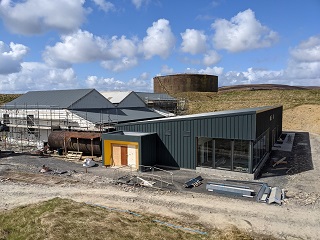 The Museum’s magnificent Pumphouse, originally built in 1937, has also been undergoing restoration work and measures to improve ventilation and protect the fabric of the building.

Its original features and interior decoration are deliberately being preserved to reflect how it would have looked throughout its operational life, both as a Naval oil store during the World Wars and later as a Museum.

Visitor Services Officer for the Museum, Jude Callister, says visiting the Pumphouse will therefore still be an authentic ‘coats on’ experience: “Stripping the building of the former displays has really brought it back to life, allowing visitors to appreciate the original machinery, and the scale of operations at Lyness.”

The project to restore the historic Pumphouse at Lyness and build an extension to the Museum had to cease in March last year due to the pandemic – just as foundations were laid. Contractors were able to return to site last July, and have made great progress since then.

The extension, which runs the full depth of the Pumphouse building, will house a series of new galleries, education space, toilet facilities, retail shop and information areas, plus a modern café with tranquil views over the nearby pond.

The galleries in the new extension will house the majority of artefacts on show, with an exhibition covering the history of Scapa Flow during both world wars and beyond.

The Pumphouse will house an exhibition about the development of the Naval Base at Lyness, an audio-visual display, and a Virtual Reality exhibit being developed with St Andrew’s University, giving visitors the opportunity to immerse themselves in WW2 Lyness.

Chair of the Council’s Education, Leisure and Housing Committee, Councillor Gwenda Shearer, said it is a pleasure to see works progressing: “These improvements have been long awaited by our Museums team and by the local community, and by enthusiasts of Orkney’s wartime history around the world. We can’t wait for the new improved museum to bring that story to life for many, many more people.”

Caroline Clark, Director Scotland of The National Lottery Heritage Fund, added: “Scapa Flow has an internationally important story to tell and thanks to players of The National Lottery, it will soon have a museum worthy of that. Rare military equipment from both World Wars along with stories from some of the 12,000 people once stationed there will help bring the sheltered harbour’s incredible history back to life exploring how it shaped the history of travel, trade and maritime warfare.”

Other works already completed include repointing of the two chimney stacks at the rear of the Pumphouse, ready for the chimneys – one of the originals, restored, and one replica - to be reinstated. Works to re-roof and re-render the Pumphouse are currently underway.

Orkney Builders (Contractors) Ltd secured the contract for the project after a competitive tendering exercise in 2019 and started construction that September.

Managing Director of Orkney Builders, Stephen Kemp, said: “The whole project team has put an enormous amount of time and effort into getting every intricate detail of both the pumphouse refurbishment and new extension just right.

“It’s been a really positive collaborative effort, and the result is going to be a fantastic asset not only for the community in Hoy, but for Orkney as a whole.”

Building work is now expected to be completed in September 2021. Thereafter the following months will involve installing exhibition fittings and carefully putting objects in place, with an anticipated re-opening scheduled for early 2022.

The Scapa Flow Museum previously attracted 14,000 visitors each year. It’s anticipated visitor numbers will increase as a result of the ambitious and extensive changes and upgrades.

The Museum’s role is to chart Orkney’s military involvement in the First and Second World Wars and provide a safe home for a major collection of wartime artefacts, many of national and international importance.

When complete, the Museum will open all-year-round for the first time in many years, encouraging more people to visit Hoy and boosting tourism throughout the island.

For now, the museum team are focusing their time and resources on the new museum.

The temporary Scapa Flow exhibition which had been in place in the Hoy Hotel at Lyness since 2018  and was part funded by the Hoy Development Trust has now closed, but all the content is available online at The Orkney Museum Treasures and Tales website.

Also on hold are the guided walks around Lyness, although visitors can pick up a self-guide leaflet from the Houton ferry waiting room.

The current project, valued at of £4.5 million, will put Orkney Islands Council Museums Service in a strong position to leverage future funding for the remaining ambitions for the overall site:

Another ambition is to secure funding to conserve some of the large objects in the collection currently on the concrete ‘boom slab’ outside the main museum building.  These include the large Bremse gun and Cowan Crane. The majority of these will be relocated to stores to prevent further deterioration from the elements for future conservation and reinstatement.

Key architectural milestones coming up include installation of the refurbished chimneys, and fitting of a glass corridor between the new extension and the Pumphouse – a feature which promises to be a striking transition between the old and new.