Respect our roadworkers! Our staff – your loved ones

Respect our roadworkers! Our staff – your loved ones
13 May 2021

Council launches campaign to put foot down on dangerous driver behaviour and abuse.

A road safety awareness campaign has been launched by the Council after a survey revealed a “horrifying” catalogue of potentially dangerous incidents at roadwork sites as well as unacceptable abuse of staff. 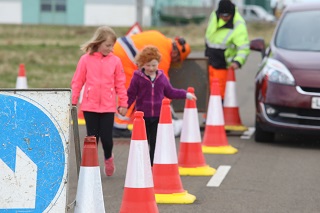 The campaign aims to drive home the message that this type of behaviour is putting the lives of essential roadworkers at risk.

The council is appealing for drivers to adhere to the speed limits and traffic lights while giving workers the necessary space when passing to allow staff to be able to carry out their jobs without fear or risk to their own safety.

Staff will also be reminded of the Council’s zero tolerance policy to any form of verbal or physical abuse and encouraged and supported to report incidents.

John Wrigley, OIC Roads and Environmental Services Manager, said: “The feedback we have received to the survey is quite frankly horrifying. The very people who are carrying out essential services in our communities for the benefit of all residents are being subjected to shocking and potentially catastrophic behaviour by members of the public.

“In addition, the reported incidents are far from rare occurrences - this has to stop – these workers could be your relative, friend, neighbour or work colleague – they are loved ones. It is not too much to ask that they get home safely without feeling at risk while simply carrying out their day job. Please respect our roadworkers.

“With summer coming, and the amount of activity (and traffic) likely to increase as we begin the extensive programme of surface dressing and surfacing, we want to appeal and remind drivers of a few basic and simple safety measures to take.”

Mr Wrigley continued: “Roadworkers are there to ensure the roads are properly maintained and improved. Roadworks are a place of work, and the people working there deserve just as much respect as you would want at your work. On busy roads, day or night, in all weathers, they risk their lives improving our roads, keeping them open. Loss of life, or serious injury, is a very real threat when motorists speed through roadworks.

“One careless accident doesn’t just potentially ruin an innocent worker’s life and that of their family and friends, but consider how this may also affect the driver and their family – possible prison sentence, loss of job, family, friends, reputation, the guilt to have to live with. All for what – to save a few seconds? We are not going to tolerate this type of dangerous behaviour and abuse of our roadworkers. 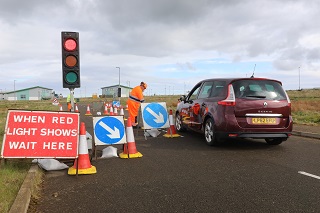 “Some of the survey results really stood out for all the wrong reasons. For red light jumping, 100% said they have experienced traffic ignoring stop instructions! This is truly horrific. Of these, 35% felt it happens almost every, or every time they are at their place of work. It is imperative that drivers take heed – we truly feel that it is only a matter of time before one of our operatives is struck.

“With regard to clipping cones or knocking over signs, 70 per cent of those who responded said they have experienced this while working within a traffic management set-up. While responses indicated occurrences were on the less than frequent end of the scale, it only takes one incursion to hit members of a workforce. By hitting cones, etc it shows how perilously close passing vehicles are getting to our crews and how exposed and at risk they are.

“More than three quarters of our workforce said they have had a near miss while at work while 100 per cent of respondees said they have experienced vehicles speeding past them while they go about their work and servicing the community. That is an appalling statistic.”

A staggering 88 per cent of the responses said they had been subjected to verbal abuse and 40 per cent have felt physically threatened as they go about their work.

“Nobody should have to be subjected to this for doing a job aimed at helping the community – it wouldn’t be acceptable at those giving the abuse, so why is it here? There were four instances of items being thrown at staff.

“This is completely unacceptable, and we warn the public that we will not tolerate ongoing behaviour of this type. We will be encouraging and supporting our staff to report all instances for forwarding to the police.”

Chairman of the Development and Infrastructure Committee, Councillor Graham Sinclair said anyone behaving in this manner should be ashamed of themselves.

“We rely on our employees to keep our roads safe. There is no place for verbal or physical abuse, jumping red lights or speeding through roadworks past workers undertaking essential tasks.

“It is quite shocking to read of some of the incidents – folk behaving in such a manner should be ashamed – how would they feel if this was them or a loved one being treated in this manner?

“Everyone is entitled to respect at work, no matter where their place of work is.”

This campaign has been timed to coincide with the start of the summer's surface dressing road works. Find out more about the 2021 surface dressing programme and how to keep updated, by reading our press release.