Anna and Davie Rendall live in Toab with their two primary school age daughters Ava and Leonie. Due to illness, Anna is a stay at home parent and currently homeschooling as a result of the Covid-19 restrictions, while Davie works at sea in Shetland on a four week on/off rota.

Anna says the slow broadband and poor internet connection is without question having an impact on their daily schooling – leading to frustration, an inability to complete certain tasks, and sometimes very long days in an attempt to get the work done.

Anna said: “It is a worry that they will appear not to be doing as well as they were at school, or even worse - fall behind if everything isn't done as expected. Everything takes so long, that we hardly have time to get outside before teatime when the weather is decent.

“The Scottish Government put millions into improvements last year in the R100 scheme and the local island authorities were included.  I’m not sure what they have actually done here as they are behind schedule.  It will make no difference to us unless they actually put a new cable here anyway.”

Anna described a typical day of homeschooling with poor broadband. 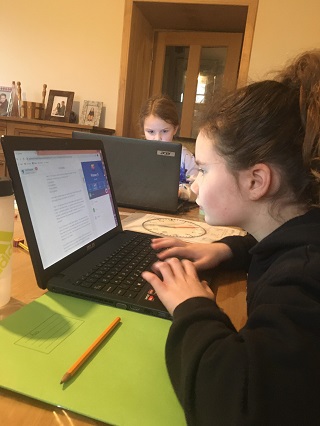 “I use two Laptops and my iPhone. Everything is set out in a fairly straightforward manner with a mixture of online structured tasks set through Seesaw - a school app. We have to use various websites and worksheets (from the school) in conjuction with Seesaw. Downloading the required material and uploading the girls completed work via iPhone is essential in this.

“In a typical day we only start at 10am. I look at what tasks both girls have been set for the day (or weekly challenge) and I write it down so I can keep an eye on the schedule and tick off what we have done.  We break for lunch for 45 minutes or so and often work until 4/5pm. Anything that isn't done just doesn't get done. I tend to write things out for them to complete in their jotters! Sometimes it's difficult to get things uploaded to the school or sometimes the device just has a tantrum and tells me there's an error, as there's no internet! I sometimes have to get the girls to come off whatever they are on so the other one can upload their work. Ridiculous. Some days it works okay, it’s like Jekyll and Hyde.”

Their current provider is Plusnet, however, they are investigating the possibility switching to see if it improves their situation – however, Anna feels that is unlikely.

“The line is estimated to be at least 35 years old. It's really not for purpose, after a lot of rain it is even slower! My parents are down the road and are on the same line. They sometimes will have no internet for days on end.  As my husband has to self-isolate when he returns home from Shetland - it means that we will move to Mum and Dads for two weeks. I really don't know how we will get on there if we can't work online for a few days on end!”

Anna continued: “We received a letter from BT in September saying that they would put £3,000 or so towards laying a new line.  As per the letter, I got in touch with them for a quote. The lady on the phone was embarrassed to tell me ‘in excess of £100,000’ or that we could split the costs with neighbours and it would cost around £8,000 each.  So, does a family living in Edinburgh/Glasgow or other cities have to pay for a new line to be installed? I think not. We pay the same rates as everybody else across the country for substandard service.  It's rural broadband deprivation. It feels like we are not worthy of the investment. It really annoys me that fibre optic is being rolled out, yet our speed is not that much better than dial up.  My husband invested in boosters to help with signal around the house, but it doesn't help with the speed.

“We do as much as we can online, but I am not prepared to stand and wait for things that will not load. It is a struggle to make videos for the school as it takes so long to get them uploaded. During the last lockdown we tried to do everything, but it meant the poor girls having really long school days.  It's not fair on them, so if it's not done, it's not done. Whilst I can manage here and miss a few things out, I am not sure how we will keep up down the road at my folks. I will have to get in touch with the school and maybe get paper versions if we can, but a lot of it is online. The school was very supportive throughout lockdown last time and will try and help us I'm sure.”

She said her daughters are very aware of the situation. Leonie said: "The internet being slow is very, very annoying as I can't get on with my work and I can't see it sometimes."

Ava added: "When we are playing Sumdog, (a school Maths game) we log onto it and it say's 'cannot connect, please try again later' it's very annoying and it never does that at school."