In May the Pickaquoy Centre is normally alive with the sound of music, when over 200 young musicians from across Orkney’s schools come together for the Instrumental Music Service’s annual music course. Due to Covid-19, the course has been cancelled for a second year running.

With the service approaching its 50th anniversary in 2023, we caught up with the past and present service managers – Edmund Holt, Penny Aberdein, Chris Giles and Lynn Procter – to hear their memories of the course, managing the instrumental music service and the challenges faced due to Covid-19. 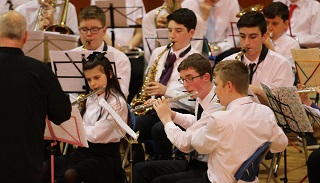 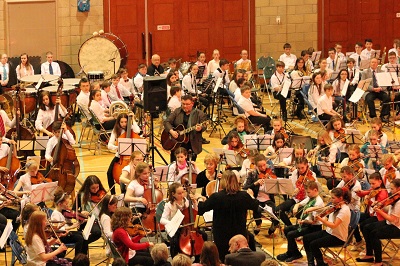 Orkney is one of only five local authorities across Scotland who do not charge for instrumental instruction and instruments are available to borrow free of charge.

Between 600 and 700 pupils receive instrumental lessons from the service at some point across an academic year. This averages around 24% of the P4 to S6 age range- compared to the national average across Scotland of around 8.5%.

In three of the last four years, Orkney had the highest percentage of uptake of instrumental music tuition of any council area in Scotland. With no financial burden placed on families, this goes some way to explaining why so many of Orkney’s pupils are involved.

Lynn Procter is the current Principal Teacher of Expressive Arts. She said there was some documented string instruction in schools which can be traced back to the 50s and 60s, however it was 1973 that saw the growth and formalisation of the Instrumental Music Service with the appointment of Edmund Holt as Music Adviser, supported by the then Director of Education, Alistair Bain.

Edmund Holt has shared some of his memories and somewhat modestly refuses to blow his own trumpet despite being instrumental in the development and growth of the Service. 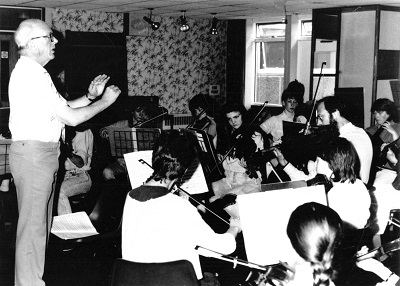 He believes credit must go to all who have played a part.

“There is no doubt that the school music staff both at Secondary and Primary level, the exceptional past and present tutors, the support of councillors, parents, and most of all pupils themselves put Orkney proudly on the national musical map. 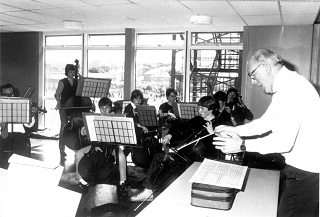 “The service is not all about individual musical success: learning an instrument will have proved to many to be a useful discipline, which at least will help them when they are parents with children of their own wanting to learn, to know that application and self-discipline underpin all such learning.

“So, it should be with gratitude that we recognise the achievements of the instrumental service, with former pupils playing in professional orchestras and bands of all sorts. Many others playing in our talented local bands and groups; and then there are our ‘home grown’ instrumental and class teachers, who, despite the temptations of opportunities in ‘the mainstream’, return to teach in the county and to keep alive Orkney’s rich musical heritage.

“The Instrumental Music Service is one of the things of which the Council has over the years and through difficult times shown itself to be justly proud,” he said.

Almost some 50 years later, the Instrumental Music Service has expanded to a team of eight instructors offering lessons in orchestral string, woodwind and brass instruments. Strings and brass are available from primary 4 upwards, and woodwind from primary 6 upwards. 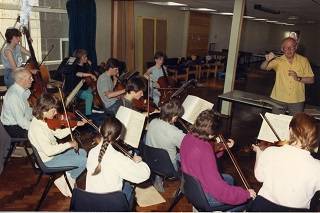 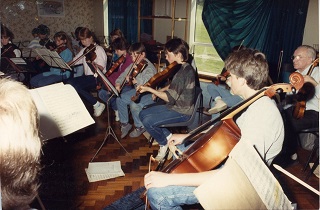 Lynn explained: “Each year we send out a letter to pupils in P4-P7 advising which instrumental families are available in their school when we have space for new beginners. Pupils opt to apply for a trial in an orchestral family, and the relevant instructor will assess them and match them to an instrument.

“We do often have more applications than spaces, so operate a waiting list for the academic year. The smaller instruments – trumpet, clarinet and violin are more popular than others and more likely to have a waiting list than French horn and cello.

“Covid-19 has put us out of sync with pupil recruitment in some schools. No woodwind pupils have been recruited this academic year as Education Scotland advised against the playing of wind instruments in schools. New violin/viola pupils were just about to start at Papdale, Glaitness and Dounby in January 2021 when schools closed, but they got underway in March/April.”

After the first lockdown, March to June 2020, the Instrumental Service had a moderately high number of pupils cease tuition for a variety of reasons, matching the trend in other authorities.

Lynn continued: “Some pupils would have found practicing challenging, both in terms of IT equipment and having the opportunity to practice while the whole family worked from home. The video call function on Microsoft Teams was not available to pupils, so instructors were only able to engage with pupils through written communication and share pre-recorded videos.

“Orkney was the first authority to resume in-person string lessons in September 2020 and brass/woodwind lessons in October 2020. We were delighted to share our risk assessments for these with Education Scotland, who are providing national guidance on these activities.”

During the latest school closure, January – March 2021, music instructors have ensured lessons have been able to continue using a variety of different methods to interact with pupils while it has not been possible within the classroom. 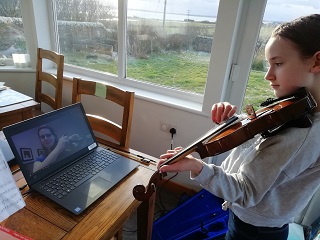 Lynn said: “The (pupil) cameras were enabled nationally on Microsoft Teams, so pupils had the offer of live lessons using the video call function. This was a great way to keep pupils engaged and keep them playing, although it does have limitations, particularly with time delay, and video/audio quality can vary. Tuning a string instrument or replacing a string is also a bit trickier by video call, but we found ways round this.”

Challenges continue to be overcome and the Orkney Schools’ Big Band has now resumed online rehearsals via Microsoft Teams – no mean feat as it involves brass and woodwind pupils from P6 to S6 and a few guitar, drum and piano pupils.

Lynn added: “We held online Big Band rehearsals in December when Orkney was in Level 1. When Orkney was moved to Level 3 in January we had to change the format, and order yet more music technology equipment because instructors had to broadcast from their own homes.

“The Music Education Partnership Group provided a lot of training sessions which has helped us get up to speed with the technology and what is realistic to achieve through online group rehearsals. In a band situation you can’t hear the pupils playing back so it is very teacher led. You need to be more organised than for a live rehearsal and check that pupils have printed the music in advance.” 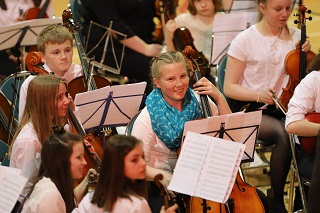 Lynn took over from Chris Giles as Principal Teacher of Expressive Arts in August 2013, after nine years as itinerant Teacher of Music. Prior to Chris (2008-2013), it was Penny Aberdein who managed the service (2001-2008).

“I was interviewed in May 2013, on the Tuesday of the Instrumental Course, and as Chris delivered his opening remarks at the Thursday evening concert in front of a 600-strong audience I remember thinking ‘oh no, I have to do that next year’! she said. 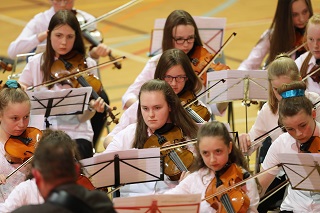 “I represent Orkney on the Heads of Instrumental Music Teaching Scotland and Youth Music Initiative networks and can confidently say Orkney is in a really strong position nationally.”

Lynn says over the years trips south have been a highlight, in particular the Orkney Schools’ Concert Band trip to Perth in March 2019.

“Having been assessed and awarded a Gold Award in November 2018, the band qualified to participate in the Scottish Concert Band National Finals at the Perth Concert Hall, where they achieved another Gold Award and had the opportunity to hear other authority concert bands.

“This was the first trip I had led, and the pupils were an absolute delight the whole weekend. The weather was not on our side; however, as we were disembarking the bus in Perth, we heard that the Sunday night Aberdeen ferry was cancelled/delayed due to poor weather. I’ll skip to the end of the story; the majority of the band arrived home at 6am on the Monday rather bedraggled after a rough crossing, having departing Aberdeen at 10pm. The Gold Award seemed the lesser achievement to getting everyone home!”

Covid-19 has put a halt on all musical ensembles, and it is this social interaction and joy of group music making that is sorely missed.

But at the forefront of it all is the joy of watching pupils’ progress.

Lynn said: “I have two groups of P5 beginners, violins and violas, who started in September. Seeing them progress, even with all the trial and tribulations of this year, is encouraging for the future.

“Watch out for these three viola pupils, I expect them to be leading their section at the 2023 instrumental course!”