The Council’s Andrew Hamilton has a successful martial arts career under his belt – his black belt that is! 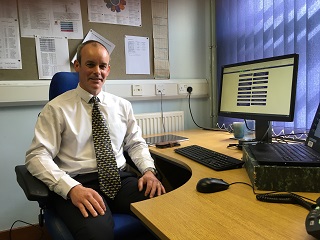 He was 17 when he passed his black belt – more than a quarter of a century ago – and is now 4th Dan – using the skills and discipline he has mastered over the years to pass on to new generations.

Andrew, who is the OIC Performance and Best Value Officer in his day job and secretary of the local karate club, in addition to teaching classes in the evenings and at weekends.

“I took up karate when I was eight after watching the original Karate Kid film! I’ve always had a fascination with the martial arts, although I don’t really know why. Looking back, I think I always had a sense that there was more to karate than just physical movement and fighting and I’ve always seen it as a deeply personal battle against my own limitations.

“To this day, I’m still fascinated by the philosophy, history and culture of karate. It's something that evolves with you depending on your stage in life – even now, after 35 years practicing, I still feel I have a lot to learn.”

Andrew grasped an opportunity to live in Japan and train full-time at the JKA headquarters in Tokyo in 1998. 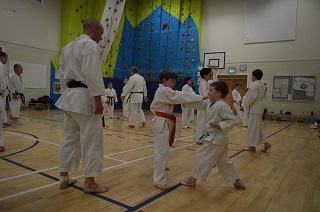 “It was quite tough, but an invaluable experience. I learned very quickly that there are no secrets to karate – only hard work.

“Competitively, I’ve won the national championships quite a few times and represented Scotland for about ten years internationally. This included nine European Championships and three World Championships – Tokyo in 2004, Sydney in 2006 and Pattaya, Thailand, in 2011 (The 2008 event was cancelled due to the financial crisis at the time). Results varied from being on the winners’ podium to being knocked out (literally!) in the first round.

“Highlights were competing at the Budokan in Tokyo, which is a dedicated martial arts stadium, winning a medal at the 2009 Euros in the Netherlands, and getting through to the last 16 in my last big international competition at the Worlds in Thailand. After retiring from competition I had the opportunity to coach the national team at the European Championships in 2017 which was another great experience.” 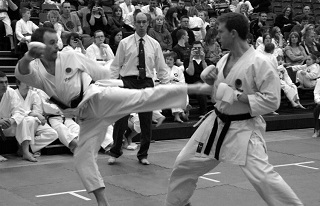 Andrew was also voted the Sportsman of the Year in 2005 at the Orkney Sports Awards, which is run by the Council, which he described as a fantastic event that recognises the efforts of so many.

Andrew first started helping out at the local club – JKA Orkney – aged around 15. The club was established in 1983 with founding member Drew Kennedy still involved in its running. 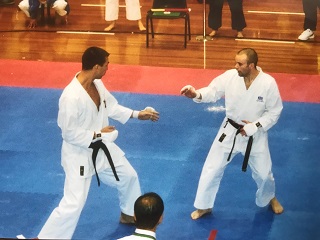 “We have always been affiliated to the Japan Karate Association which is the largest and most prestigious karate organisation in the world. The JKA has its headquarters in Tokyo and has branches in over 100 countries.

“Our links to Japan are important and all our instructors have passed their black belts in front of a panel of high-ranked Japanese instructors. This means our students are practicing a genuine traditional Japanese martial art with a lineage that can be traced back to Okinawa where karate originated.

“We have between two and four instructors at each class, so we are able to split things up depending on the number of students and ability, and there are between 30 and 40 students. We train on Mondays, Wednesdays and Fridays at Kirkwall Grammar School, with brown and black belts also training on a Saturday morning.

“We have had a lot of success competitively, with several of our members winning titles and medals at national level, as well as representing Scotland at junior and senior international level. The club’s senior students have also regularly travelled south to take part in national gasshukus, which are training weekends with some of the best Japanese instructors in the world.

“The club also usually holds two gradings a year with top instructors from JKA Scotland, where members have the opportunity to take the test for their next belt.”

There are much closer to home events also.

“Drew, myself and some of the other instructors have been out to the outer isles quite a few times to do taster sessions as part of the Council’s Active Schools Programme – it was really good to give the bairns there a go at something different, which they wouldn’t otherwise have had the opportunity to do. We have also organised quite a few club competitions so that our students can test their skills under that extra bit of pressure.” 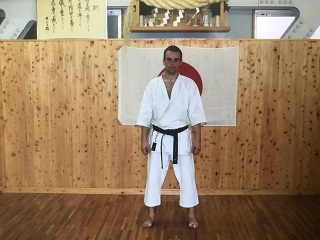 Andrew is very proud of how well Orkney students have performed competitively over the years, but also praises the account they give of themselves when travelling away for training.

“I enjoy helping students improve, not just with the physical movements, but also gaining confidence as they progress.

“Folk do karate for all sorts of different reasons. It can be self-defence, self-confidence, discipline, fitness and flexibility, an interest in oriental culture, or competition. Whatever the reason for doing karate, it’s like anything else – the more you put into it, the more you get out of it.

“Nowadays, for me personally, karate is all about balance, but my reasons for training have changed over time. For example, my time in Japan was all about hard basic training, I then spent about four years doing nightclub security in Edinburgh so I was interested in practical techniques, then I started competing internationally so my focus changed to that, and now I’m at the stage where I want to pass on my experience to help keep the club here thriving and develop as an instructor.

“Anyone can do karate, regardless of age or natural ability. Having said that, karate is not for everyone – you have to be committed to training regularly and be prepared to put up with a couple of bumps and bruises along the way.

“Folk are encouraged to work at their own level but keep pushing themselves to improve and our members range from ages five to 60 plus! Although the discipline is quite strict this is introduced gradually along with dojo etiquette, and the club here is very welcoming. It’s a great way to build confidence, learn self-defence, get fit and have fun, especially for kids.” 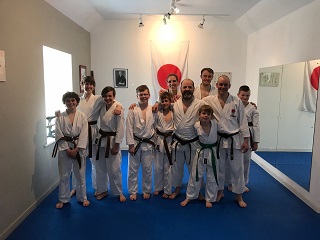 The pandemic has had an impact on the club’s activities.

“After the initial lockdown in March 2020, we started training outdoors at Inganess beach throughout the summer. We were then back in our dojo at KGS until the lockdown after Christmas. During this time, I ran free Zoom classes twice a week. This was quite challenging as there was a wide range of abilities and people were training at home where they maybe didn’t have too much space. Having said that, one of the great things about karate is you don’t need any special equipment or big space, and you can train by yourself and adapt any exercises to your surroundings.

“We returned to KGS after the Easter break but still had to follow social distancing restrictions. Since moving to tier one in May our under 18s started back doing contact work and sparring and our adult members can now do this too since moving to tier zero in June, so we’re more or less back to normal. Unfortunately, due to Covid, we haven’t been able to travel south or hold any gradings since 2019, but hopefully we’re not too far away.”

Andrew was born in Glasgow, but his family moved to Orkney when he was just a few months old. He is married to Kim, who works for NHS Orkney, and they have three bairns Tom (12) James (10) and Daisy (3).

He’s been in his role as Performance and Best Value Officer since July 2018, although he did spend a couple of years in what was the Policy Unit as a graduate trainee on leaving university in 2004.

“My job involves co-ordinating Performance and Best Value work across the Council and reporting progress on our various plans and activities to Elected Members and the public. It’s quite a varied role and involves working a lot with other Council services which I enjoy.

“The biggest change for me with Covid was working at home which can be challenging with three children. Things were a bit easier when the nurseries and schools returned. In terms of the job, a lot of performance work was put on hold at the start of lockdown last year as the Council’s priority was obviously responding to the unfolding pandemic. However, we were in the process of procuring a new performance management system so that project kept me busy throughout. With performance work, we’re now more or less back to normal, although I think the impact of Covid will be around for a while yet.”