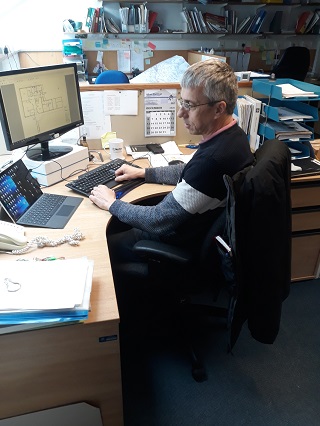 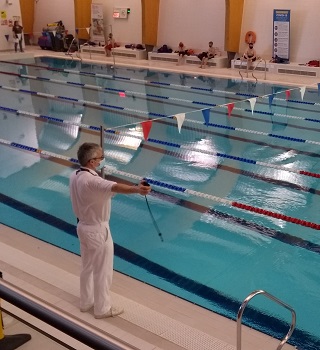 Day-to-day, Derek Allan keeps the Council buildings ship-shape, and in his time off he does the same for many Orkney youngsters – ensuring they are kept fit and active having managed, coached and judged various different sports for almost 30 years!

A Building Inspector with 18 years’ service to the OIC, Derek, 60, lives in Kirkwall with his wife Linda. The couple have three grown up children – Michael, who lives in Kirkwall, Fraser who has opted to go State side and lives in California, and Heather who emigrated to Auckland, New Zealand.

Derek moved to Orkney 30 years ago and began his long career with the Council, carrying out daily reactive and planned repair works to Council buildings, while also assessing the energy performance of Council housing to ensure they are up to standard.

He does something similar when judging at swimming meets home and away – assessing the performance of athletes!

Derek explained how his sporting volunteer work began: “When I moved up here over 30 years ago, I played football in the league and I went on to manage one of the teams for a few seasons. When the children were younger I got involved first with the coaching and as a parent helper with the football teams then the rugby and also started off as a timekeeper in the swimming - a small part of the larger amount of people on the poolside.”

The swimming facilities in Orkney nowadays are a far cry from when folk had to learn in the sea – but a vital life skill, particularly for folk who are surrounded by the sea at almost every turn.

“The bigger pool at the Pickaquoy Centre in Kirkwall has certainly allowed more swimmers to be taught to swim at each lesson and having the great facilities is an incentive for them to keep coming back. A little bit better than going out to Scapa with Dave Keldie where swimming in Orkney started!

“Swimming is such a great way of keeping fit as there is no impact on your joints and it doesn't cost a lot to get yourself kitted out and with water all around us it gives you confidence that if you ever landed in the sea you will be able to survive for a while on top of the water, allowing you time to get out or be rescued.”

Derek began as a timekeeper at swimming meets but it wasn't long before he was asked to be a turn judge (J1), which as the title suggests, involves looking at the swimmers when they are turning at the end of the pool.

After gaining considerable experience, he then moved on to become a stroke judge (J2) and onwards carried out a starter’s course, passed as a recorder and finally trained as a referee, all of which had exams to pass along the way.

Derek was willing to give up his free time as he wanted to help the Orkney Amateur Swimming Club to run accredited meets, where the times are accepted for meets south.

He is now a well-known judge on the local and national circuit, having been away at North District meets in Aberdeen, Inverness and Fraserburgh, Scottish swimming events in Edinburgh and Glasgow, British swimming events in Aberdeen, Manchester and Sheffield along with the Island Games in Gibraltar in 2019. He is also President of the North District.

“For most of the meets, the organisers ask for the availability and willingness of technical officials to attend. Some of the meets are five days long and you can be at the pool for around 12 hours a day.

“I enjoy seeing the swimmers coming into the club at a lower standard and looking nervous when they step up onto the blocks and seeing them move up the club and watching them compete at their highest level.

“Thanks to attending at the higher level meets it has given me the chance to forge some great friendships and watch world class swimmers compete. I have also been lucky to have been awarded the Official of the Year at the Orkney Sports Awards twice and been named the Scottish Swimming Technical Official for the North District.” 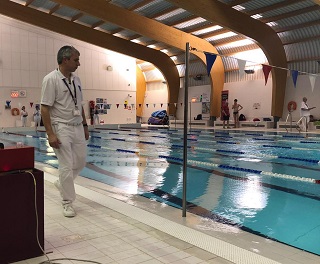 Derek would encourage others to get involved.

“I have had a lot of enjoyment out of being involved in swimming, it can be time consuming but I have enjoyed my time on and off the poolside with all the people I have met during this time.”

The pandemic affected Derek’s work and volunteer duties but, true to form, he went over and above.

“At work we were only able to carry out emergency repairs and when the recycling centre reopened I volunteered to go to help up at Hatston. It was good to meet the public who were grateful that it was open (well most of them were) and also to see other people from the same service who I knew by name but had never worked alongside them.”

On the swimming front, all went very quiet as everything shut down.

“I have found it very strange, before lockdown I would have 4 or 5 weekends a year at district meets, possibly a week-long Scottish meet during the year, along with 15 evening meets in Orkney. From that it went to nothing. 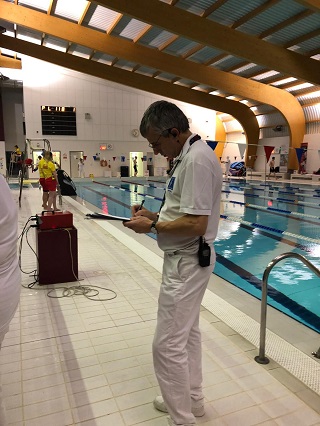 “With being involved in the North District it means lots of different meetings with others across Scotland – all of this is now online, which, to be honest, makes it much easier for me to attend.”