Like ships passing through the String on a tide, Orkney Islands Council has bid a fond farewell to Brian Archibald, Head of Marine Services, Engineering and Transportation and Harbour Master, and welcomed his successor to the role, Jim Buck. 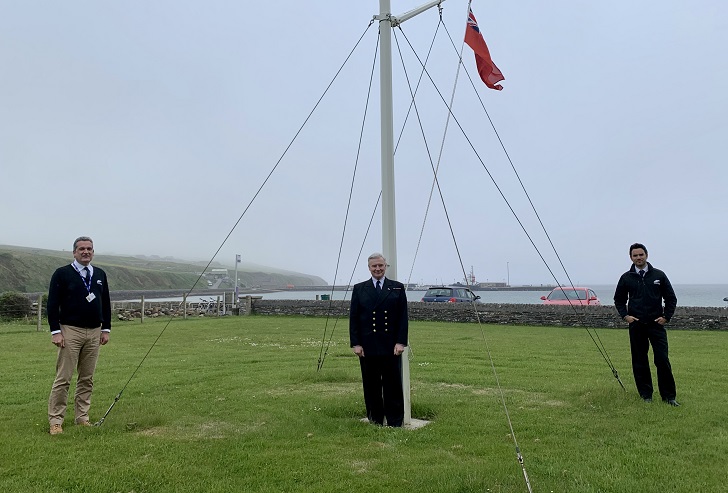 Brian joined the OIC in April 2012, and was able to navigate the service through some choppy waters – in his first year, the port had 11 Flotta tankers, no ship-to-ship operations, 65 cruise ship visits and made a £2 million loss. In his final full year, the service saw 36 Flotta tankers, 165 cruise liners call, 66 ship-to-ship operations and made a surplus.

But Brian, who served in the Royal Navy for 36 years as a warfare officer, modestly puts the turnaround down to the team alongside him.

“A key feature of my time has been the significant improvement in the morale of the staff – when life was quiet and they were emerging from a downsizing and restructuring, morale was poor but more recently the team have rebuilt their feeling of worth and have worked incredibly hard to keep services running, despite having the oldest ferry fleet in Scotland, and to build up business into the number one place for cruise in the UK and for ship-to-ship operations.”

Brian came to the Local Authority with a distinguished career history, having had three sea command appointments in the Royal Navy; serving in every ocean of the world including the Arctic (Cold War) and Antarctic (Falklands deployments) and several deployments to the Gulf.

Some of his highlights since starting with OIC include the first ship-to-ship transfer as soon as the licence was secured; the surfacing of all airfields, the provision of new fire tenders and the construction of three new terminal buildings and the Kirkwall Harbour Flood Defence Scheme.

“Others would be the Battle of Jutland, Scapa 100, 100th anniversary of the first deck landing of an aircraft at sea and, the 100th anniversary of the loss of HMS Vanguard commemorations and being voted as the top cruise destination in north west Europe,” Brian continued. “Much is being achieved in recent times, such as the arrival of our new pilot launch, Scapa Pathfinder and our new ferry, Nordic Sea; the ordering of two new tugs, Odin of Scapa and Thor of Scapa and the arrival of the ‘stretched’ Hoy Head.”

Finally, he pointed to the publication of the Harbour Master Plan and the first stages of the Orkney Inter Island Transport Study – all necessary for the future of the harbour and for transport to the isles.

While leaving with a “heavy heart”, Brian feels the time is right for “fresh legs and new energy” to take forward the ongoing projects such as the Master Plan, which he believes will be crucial for Orkney to flourish in the years ahead.

“I am immensely privileged to have had the good fortune to have lived and worked in Orkney for these past eight years and it has been an honour to have led such a committed, professional and hardworking team of mariners, engineers and transport providers. Everything I have achieved has been down to the team and without them, Orkney would not be the wonderful and successful place that it is.

“Having been a mariner for 44 years, the time is also right for me to now focus on my family who, like so many seafaring families, had to manage without me when I was at sea. But I will miss my friends, colleagues and our many satisfied customers though I am certain that my successor, Jim Buck, will move things on to greater successes.”

Born in South Wales, bred in the Peak District and coalfields of Staffordshire, Jim has a long affiliation with Orkney, spending family holidays in and around Birsay at the home of close family friend Gregor Lamb, passionate Orcadian, storyteller, author, broadcaster and at that time a Head Teacher.

Joining the Royal Navy from school in 1987 as a Seaman Officer with the desire to become a Naval Aviator, he over a varied 30-year career became a Specialist Navigator (Marine Pilot) and Master Mariner (warship). Sailing all seven seas and visiting all the continents with the notable exception of Australia, Jim has travelled the world on a variety of naval vessels, from the smallest mine hunter to the largest aircraft carrier, traversing the oceans from the frozen waters of the Arctic and Antarctic to balmy Mediterranean and Caribbean Seas.

He has command both Ship’s and Squadrons of vessels, held instructional and strategic posts and worked with an array of international organisations, navies and individuals, including entering into the heart of Africa to serve with the United Nations on a peacekeeping mission at the edge of the Great Lakes in the Democratic Republic of the Congo.

During his time in the Navy he maintained his links with the island, not only visiting privately but also on warships, either to berth in Kirkwall or transiting Scapa Flow.

Made a Fellow of the Royal Institute of Navigation for his work on the navigation of Small Craft, he completed his career in the Ministry of Defence, leaving the service in 2017.

On leaving he continued his maritime career, working first at Peel Ports Great Yarmouth as the Head of Marine Service and Operations and then for OSI Maritime Limited as a Business Development Director, selling military navigation equipment to European and North African navies.

Jim returned to Orkney in May this year.

“I love the islands and am looking forward to providing the strategic direction and leadership to secure a strong and prosperous maritime future for Orkney.”

OIC Director of Development and Infrastructure, Gavin Barr, expressed his gratitude for the “significant positive impact” with which Brian has had on the Service and the Council for our community.

“These last few years has been a period of much change and progression and Brian can look back with significant pride at the contribution that he has made to this success, alongside his Marine Services, Engineering and Transport team. Brian has overseen a great deal of infrastructure development and he and his team have also maintained lifeline services and operated commercial port activities - which have turned from significant losses to positive contribution to the Strategic Reserve Fund over this time. All with no significant accidents or incidents despite operations in some of the harshest waters and tides in the world. Brian should be rightly proud of these achievements and can move into retirement in the knowledge that he leaves the Service in good health.

“It has been my great honour and pleasure to work with Brian these past eight years and I wish him and his family all happiness and fulfilment in his retirement.”

Gavin continued: “With every departure there is the opportunity for a new face and I am pleased to welcome our new Head of Service Jim Buck who has substantial naval and commercial experience and a long standing relationship with Orkney since childhood. These attributes and Jim’s passion for the sea and community will stand the team in very good stead for the years ahead and I very much look forward to working with Jim into the future.”