Liam elected as MSP for Orkney

Voters have elected Liam McArthur to represent Orkney at the Scottish Parliament. 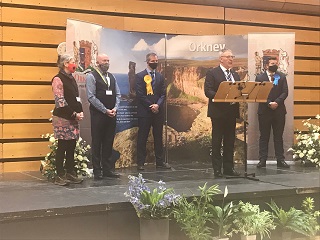 The result of the poll to elect Orkney’s constituency MSP was announced this afternoon at the conclusion of the Election Count for the Orkney constituency, which took place at the Pickaquoy Centre in Kirkwall.

After the votes were counted, Returning Officer John Mundell made the declaration that Mr McArthur has been elected to serve Orkney at Holyrood.

The results in full are:

There was a high turnout for the Orkney poll, with 65.5% of the local electorate voting in the election.

There was a high return rate among postal voters. In all 6,096 postal votes were delivered to homes across the county. Of these, more than 87% were returned in time for today's count at the Picky Centre.