First lady of the sea to receive royal welcome! 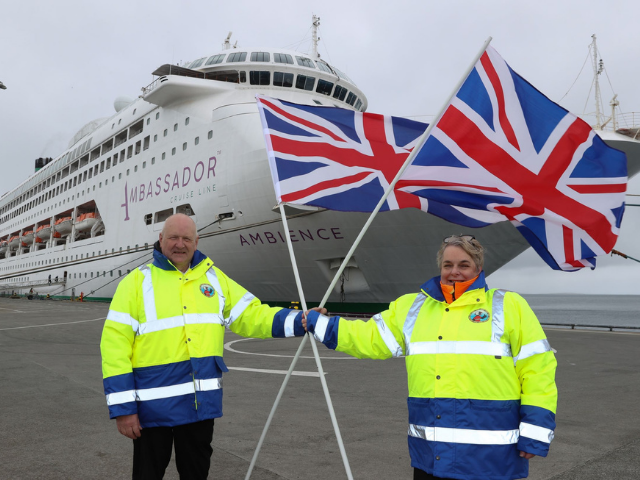 Passengers from the Ambassador Cruise Line’s first lady of the sea “Ambience” will be treated to a spectacular sight during their Orkney visit as part of the county’s Platinum Jubilee 70th anniversary celebrations for our own first lady of Great Britain, HM the Queen.

Ship2Shore Orkney is a meet and greet service for cruise liners visiting our shores and they want to pay homage to the 70th anniversary of Her Majesty’s reign, Her Platinum Jubilee - a feat no previous monarch has achieved.

Susanne Carter and Calum Walter of Ship2Shore have invited the Queen’s representative in Orkney, Lord-Lieutenant Elaine Grieve, along to get the proceedings underway by putting in place the first of 70 Union Jack flags that will be flown along the pier and harbour. Elaine Grieve will be joined by around 180 P1-7 children from Glaitness School, who will make their way to Kirkwall pier on Monday morning (30 May) to assist in placing and raising the ensigns along the quayside.

The youngsters will be kitted out in Union Jack bowler hats and noisy tooters to welcome passengers from the cruise ship and not forgetting local folks and other visitors who happen to be in the town centre around the time. They will receive party bags as a thank you.

The Lord-Lieutenant said: “I am delighted to play a part in the Ship2Shore Orkney celebrations of HM the Queen’s Jubilee celebrations. What a visual spectacle along our beautiful harbour area for visitors and local alike. The 6 February this year marked a truly historic moment as Her Majesty The Queen became the first British monarch to celebrate a Platinum Jubilee. She has given unwavering dedication to our nation and beyond for the past seven decades – a quite remarkable achievement. I am so pleased that this summer we are able to come together as a country to celebrate her historic reign.”

Eddy Ross, President of the Kirkwall branch of the Royal British Legion, will also be there to call out the order for “three cheers for Her Majesty – hip, hip hooray”. It is hoped that there may be a Pipe Band presence too.

Calum explained that the flags will be in place until Sunday 5 June – the culmination day of the Jubilee celebrations.

“We plan to take down the flags in the evening and replace daily so although the passengers from the Ambience will be among the first visitors to be treated to the spectacle, others will also be able to enjoy the sight up until the evening of 5 June. We hope the children will march through the town’s main throughfare on their way to the pier with a police escort if possible. They will then help put up all the flags which will run along the pier up to the last one in front of the Kirkwall Hotel. A number of Union Jacks will also be flown at the Kirkwall Travel Centre while at Hatston pier we will have Union Jacks and Commonwealth country flags flying.

“While the weather is in the hands of Mother Nature, we do hope it will be possible and a fairly spectacular sight to see and hear! HM the Queen has given her life to the nation through her royal duties so it’s only fitting that we celebrate this grand occasion in style. We always try and give our cruise visitors a welcome to remember but this will be even more special.”

The flags will be put to good use thereafter with those surplus to Ship2Shore requirements being donated for use by the Royal British Legion branches in Orkney who fly Union Jack flags all year round.

Ingrid Rendall, Head Teacher, at Glaitness School said the school was honoured to be asked.

She said: “We are planning a Jubilee venture indeed which will involve the P1-7s. We are planning to walk from Glaitness to Broad Street and follow the main street right to the harbour. I’m hoping it will create something truly memorable for the children and any parents or community members who happen to be there or come along and join us. We are thinking lots of red, white, and blue and possibly even some child-created crowns thrown in!”