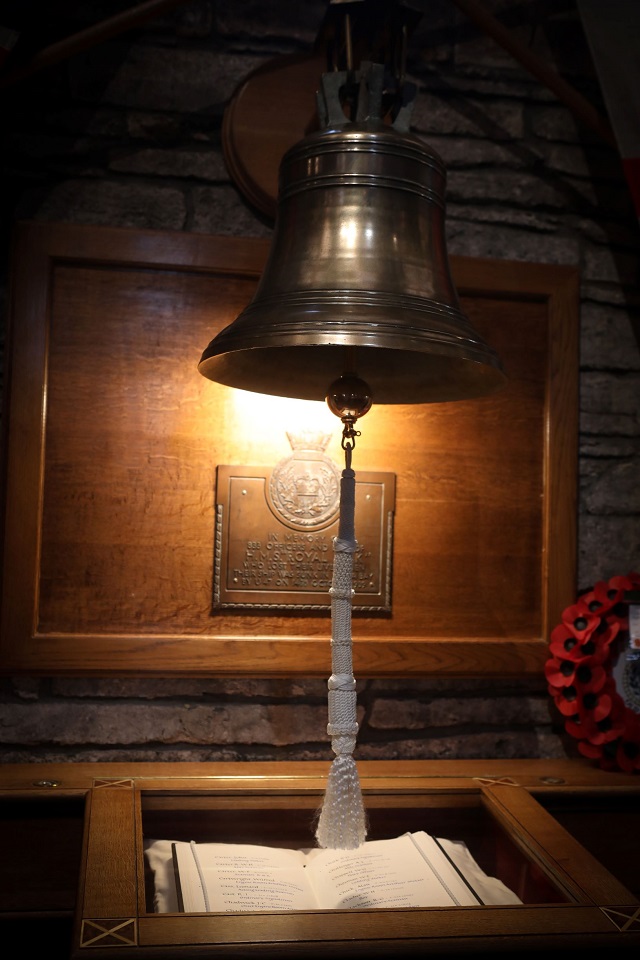 A bell from the battleship HMS Royal Oak has been restored to its former glory and rang out once more on the eve of the 82nd anniversary of the ship’s sinking with the loss of 835 boys and men.

Thanks to the skills of local craftsman Richard Wilson and ropemaker Paul New, from Tyneside, the bell now has a clapper and tassel – sponsored by Bill Spence.

A small ceremony, which included the son of a survivor of the ill-fated ship, was held in St Magnus Cathedral – home to the bell since it was salvaged in the 1980s from the ship’s resting place in Scapa Flow – on Wednesday 13 October for the unveiling of the now complete bell.

Bill explained how the story unfolded: “When we were planning the commemoration of the centenary of the Battle of Jutland in 2016, we identified an occasion when we wanted to ring the Royal Oak bell as HMS Royal Oak had been engaged in the Battle of Jutland before she was torpedoed in 1939. The ship and bell survived Jutland and we thought it would be appropriate for her bell to be used as part of the commemoration ceremony; however, there was no clapper in it. I thought it might be fitting for the bell to be recommissioned and used again in remembrance of the 835 lives lost.”

Towards the end of 2019, Bill contacted a local craftsman and friend, Richard Wilson, and asked if he could help. It had been hoped to have the clapper made and fitted ready for the anniversary in 2020, however plans had to be delayed due to the pandemic.

In the meantime, Richard carried out online research and was eventually able to get inside the Cathedral to measure up, acquiring the bronze for the clapper proved difficult locally so he had to source it online.

“It took me around a fortnight to make the clapper in my shed at home mostly using a hobby lathe and a CNC router. I was a bit taken aback when Bill asked me to do this for him. Obviously, it is a great honour and a privilege for me to be asked considering the history of the ship and the lives lost during the sinking. Hopefully this clapper will be around for years to come and will be used to commemorate the event each year.”

However, this was only half the tale. The clapper needed a tassel – a rope that someone would actually hold to ring the bell.

Fran Hollinrake is the Visitor Services Officer and Custodian at the Cathedral. She said: “I’ve attended several commemorations over the years, and so has my husband Andy, as he is a member of the Royal Naval Association. We became friendly with a couple, John and Tracy Welch, who come up every year for the anniversary on 14 October. John’s father, Stoker Petty Officer John Welch, was on board HMS Royal Oak the night she sank, but he survived. His son John was a rigger in the Tyneside dockyards, and spent much of his working life working with ropes, so he was delighted to be involved in the making of a tassel. Unfortunately, ill-health ultimately prevented this, but instead passed on the job to his former apprentice and friend, Paul New. The tassel arrived in Orkney and was fitted together with the clapper to the bell.”

John and his wife Tracy arrived in Orkney this week and were present at the unveiling.

John said: “My father was born in 1905 and joined the Royal Navy aged 21 as a Stoker 2nd class, eventually becoming Chief Stoker in 1941. He joined HMS Royal Oak in June, 1939. The night of the sinking he was on deck having a cigarette when the explosion happened. He managed to get off the ship and into the water and was picked up by the Daisy II. He said he had held on to another chap in the water who was in difficulty, as he was an excellent swimmer and had medals for life saving and water polo, but when they were both pulled aboard the crew of the Daisy unfortunately the other chap had died. He was lucky to escape with burns to his hands and face. After medical attention I think a week or so later he was sent back to Portsmouth to join another ship .

“As I far as I can remember he never returned to Orkney, but after the war attended the reunions in Portsmouth on a regular basis. As for his feelings about that night it wasn’t something he went into in great detail, but he did say that if he could get back on the ship he would know exactly where his gold lighter and cigarette case were. On leaving the Navy in 1946 he returned home to Newcastle upon Tyne, where he was a tailor for a brief period, but his love of the sea and the fact he had his stripes led him to the job of Quaymaster at North Shields Fish Quay where he remained until retirement.”

(Pictured below are those involved in the creation of the clapper and tassel – left to right, John Welch (junior) Richard Wilson and Bill Spence.)

John senior married in 1953 and had three children. He also had another son from a previous relationship. John passed away in 1979.

John and Tracy decided to visit Orkney for the first time on the 74th anniversary and have attended every year since, apart from 2020 due to the pandemic.

Tracy continued: “Being John’s eyes and hands are not what they used to be he asked a close family friend, Paul New, to make the tassel. Paul was John's apprentice rigger, and at one point in the Royal Fusiliers. He has been diving in Orkney also and was touched to be asked to design and make it. He said it was for all the men still on board.”

Representing the Council, who maintain the Cathedral on behalf of the people of Orkney, Councillor Stephen Clackson also has a personal connection to the Royal Oak, having tragically lost his uncle Ronald George Clackson when the ship went down.

He said: “My Uncle Ronny was the closest sibling in age to my dad and his favourite brother. He was very technically minded and joined the Royal Navy on 5 July 1938, aged 18¾, for ‘7 & 5’ years. After training at the shore establishment HMS Victory, he was posted to the recommissioned HMS Royal Oak as an ordinary seaman on 7 June 1939, when the ship was expected to be embarking on a 30-month tour of the Mediterranean. Looming hostilities set the course of the battleship in another direction, and by August she was in Scapa Flow. My uncle was reported missing presumed killed when the Royal Oak was sunk by torpedoes from the U-47 in the early hours of 14 October, just a week after his 20th birthday. The news was devastating for my grandmother, whose brother had been killed on the Somme in World War I at the same age, and she never really got over it. I often wonder about my uncle’s short spell in Orkney and how he celebrated his last birthday on 6 October 1939.”

(Pictured below is a photo of the new clapper and tassel) 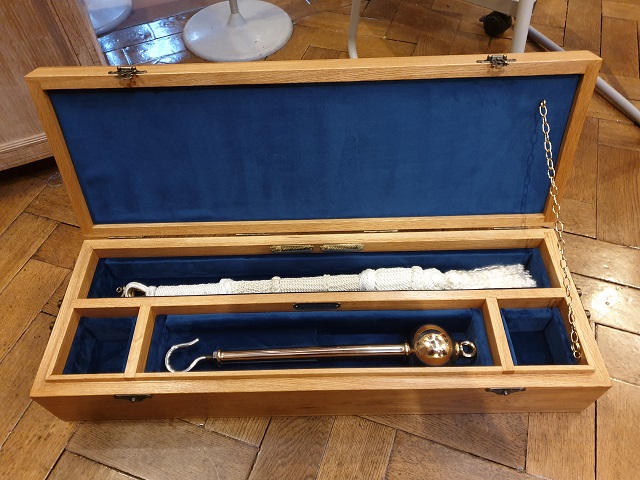 HMS Royal Oak was one of five Revenge-class battleships built for the Royal Navy during the First World War. Completed in 1916, the ship first saw combat at the Battle of Jutland as part of the Grand Fleet.

On 14 October 1939, Royal Oak was anchored in Scapa Flow when she was torpedoed by the German submarine U-47. Of Royal Oak's complement of 1,234 men and boys, 835 were killed that night or died later of their wounds.