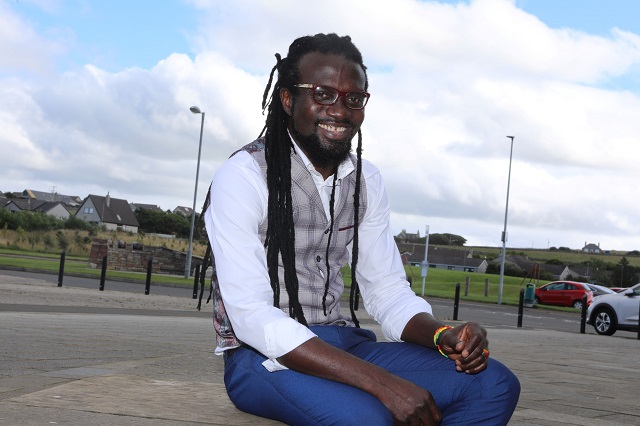 An “inspiring” Orkney teacher who works tirelessly to make society a better place for everyone has been named as the first ever recipient of the Saroj Lal Award in recognition of his outstanding work in challenging discrimination and promoting equality.

Theo Ogbhemhe, who teaches Religious, Moral and Philosophical Studies at Kirkwall Grammar School, has dedicated the award to his father who instilled the powerful virtues within him and the people of Orkney who made it possible for him to demonstrate the qualities and values that won the award.

Theo said he was overwhelmed to have been named the inaugural award winner. “I do what I do because it is the right thing. This award means such a lot to me and the fact that it is the ‘very first’ one is an icing on the cake. It amongst other things shows that there is a good argument for the acceptance of a positive, inclusive and forward- thinking culture and mind-set. One that promotes and facilitates equality and diversity, and actively challenges discrimination.

“It is surely going to be a stepping-stone towards doing more work to promote equality and challenge discrimination. It somewhat legitimizes the hard work we as a community have been doing and shows that we have got a lot more to do.

“I want to see a world where the majority see promoting equality and diversity, and actively challenging discrimination as their individual duty. A world where social justice drives our actions.”

Saroj Lal was a trailblazer working at the forefront of multicultural and anti-racist education in its early years and laying the foundations for many others to build on.

Her son and award panellist, Vineet Lal, said: “Theo embodies the pioneering spirit the award recognises in every possible way. His commitment to his learners, school and wider community is outstanding, and he is an inspiration to us all. It’s wonderful, and immensely moving, to see her legacy live on through this award and Theo’s passion for embracing diversity and equality in everything he does.”

GTC Scotland sought nominations for the award in memory of Saroj Lal, with the aim “to recognise teachers who exceed expectations and demonstrate a pioneering spirit, show determination and challenge adversity in efforts to promote and facilitate a culture and ethos of equality and diversity and actively challenge discrimination”.

Former Head Teacher Don Hawkins put forward Theo’s name and his successor, Claire Meakin, commented: “The RMPS curriculum at Kirkwall Grammar School has been enhanced immeasurably by Theo’s work and he consistently weaves important messages about equality and diversity through the curriculum, the everyday life of the school as well as widening out his campaigning to the local community.

“He has inspired young learners from all walks of life and his campaigns are part of the fabric of the KGS community. Theo rarely wants the recognition or the credit for the very important work he does for the promotion of equality and diversity within our community, but we believe his pioneering spirit is second to none. Our KGS community is very lucky to have such a strong role model who challenges us all to do the right thing, every day.”

The Council’s Executive Director of Education, Leisure and Housing, James Wylie, said: “Theo’s efforts epitomises the quality of partnership within the school and wider community that make a difference to behaviours and attitudes which should be applauded. To be named the first ever recipient of the Saroj Lal Award is testament to him as a teacher but also as the person that he is. I have no doubt that this accoldade will spur Theo to continue to challenge the society we live in, making it a more inclusive place for all.”

Chair of the Council’s Education, Housing and Leisure Committee, Councillor Gwenda Shearer, said: “In the Orkney community we are very aware of Theo and the fantastic work that he does taking his teaching responsibility to a new level. His powerful messaging, which clearly comes from the heart, can only help instil the same values in the students that he helps guide into a more inclusive and equal society.”

Dr Pauline Stephen, Chief Executive and Registrar, GTC Scotland said: “Theo Ogbhemhe’s story is truly inspiring, as is the proactive approach he has taken to promoting equality and diversity at Kirkwall Grammar School and with the wider community.

“The award panel members were overwhelmed with the response to this first year of the GTC Scotland Saroj Lal Award for a Pioneering Spirit in Equality and Diversity. It was a privilege to meet with teachers to hear about their professional values in action and the impact of their teaching and learning on their learners, colleagues and communities.”

Professor Rowena Arshad CBE, FEIS, Chair in Multicultural and Anti-Racist Education, University of Edinburgh and award panellist, said: “What Theo Ogbhemhe's efforts demonstrate is that every teacher can make a difference. Having the support of the school leadership in this instance has made the work even more impactful.

“The Saroj Lal award recognises teachers who are using the formal curriculum and extra-curricular activities to open up the minds of young learners to diversity and difference, educating them to challenge all forms of discrimination and developing skills that will make them responsible global citizens.”

Theo was born in the geographical construct presently referred to as Nigeria sometime in the 70’s and arrived in Orkney around nine years ago to take up an RMPS probationary teaching role after completing his PGCE at the University of Strathclyde, Glasgow.

His ethos in life is simple…”to make myself a better person and society a better place.”

He explained: “Inequality damages society and so does discrimination, and I have always believed in working towards a world where the system shows no bias to a race or class. The reason is simple; it is the right thing to do. I am glad I landed in Orkney because it has been a really grand experience for me.

“I have been welcomed and accepted, I have also benefited from the community spirit, one rooted in diversity. We need not let external forces come pull the rug of ‘celebrating and valuing how different we all are’ from underneath our feet. We have to keep reminding ourselves of the need to continue to promote human rights and freedoms, which are based on the principles of dignity and respect.”

The basis for Theo’s tireless campaigning is because he believes that everyone should feel valued and respected.

Since moving to Orkney he has organised the annual LGBTQ+ events encouraging students to make banners bearing very powerful messages in support of the anti-homophobia campaign.

“We have always had permission from the Head Teacher for a non-uniform day that encourages the wearing of the colours of the rainbow. This has helped to reiterate the school’s very strong anti-bullying ethos and this work supports one aspect by reminding everyone that homophobic bullying has no place in KGS and society at large. This has impacted positively on the LGBTQ+ students who now genuinely feel respected and valued, which can easily be seen in how they are freely expressing themselves aesthetically.”

Theo also helped set up the Orkney Oot wae Racism group formed after the death of George Floyd in the States.

“Its main aim is to educate its members and the wider community on the need to be involved in the fight for racial justice. To help with creating a platform for an inclusive culture that understands racism from the viewpoint of slavery and colonialism.”

Theo has also organised the annual “Making Noise” music festival to act as a platform for the community to come together and celebrate equality and diversity.

“The festivals are planned by members of Consciousness After School Club I run, and it has been an experience that has taught its members who range from learners across all classes, abilities and those with additional support needs; to work successfully with and value the contributions of others.”

Theo has the support of his Faculty colleagues (Social Subjects faculty at KGS) as he explained here: “The Faculty took a concerted approach in celebrating Black History during Black History Month, a celebration that saw displays of black success in history and present. These displays are still up, and they have helped enlightened learners, some of whom are starting to have discussions about racism, equality and diversity. It has also helped address some uncomfortable behaviour and has kept learners informed on racism.

“I have tried to work towards shedding light on the destructive impact of discrimination and the emotional and mental harm and risk this may cause. I worked with members of Consciousness After-School Club to take action to help eradicate the stereotyping of those with mental health issues and encourage them to speak out of isolation. To this effect, we organised the ‘Speak Oot’ campaign, and with funding from the Council’s Culture Fund, we ran a poster competition in the local schools; with the winning posters printed professionally and displayed around Orkney.”

He has championed the Fairtrade initiative over the last decade, making KGS a Fairtrade School and KGS is currently partnering schools in Pakistan and Nepal in the Connecting Classrooms global education programme.

“We are currently collecting donations of educational materials, old tech and funds to provide school uniforms and empower at least 20 widows in Pakistan and Nepal.”
Theo has taken action to help eradicate prejudice and stereotyping against those who access the local Foodbank, launching the “Give Food Poverty the Boot” campaign, which saw students research the work of the Trussell Trust Charity and seek donations locally.

“The campaigns and events I have organised over the years have impacted positively on the young people I have worked with, empowering them with those problem-solving skills and ability to connect multiple ideas and develop solutions.

“I have done this by working with the Council; third sector organisations and local/national charities. I have and will continue to help create avenues and spaces for children, young people, (especially those who lack social skills and those with additional support needs) where they can access a wide range of high quality, themed, stimulating and fun programmes that are recreational and educational in nature.

“It is a thing of joy to see young people happy and self-confident in later life. Raising the self-esteem of young people helps equip them with what they need to become global and responsible citizens, as is keeping them safe and healthy.”